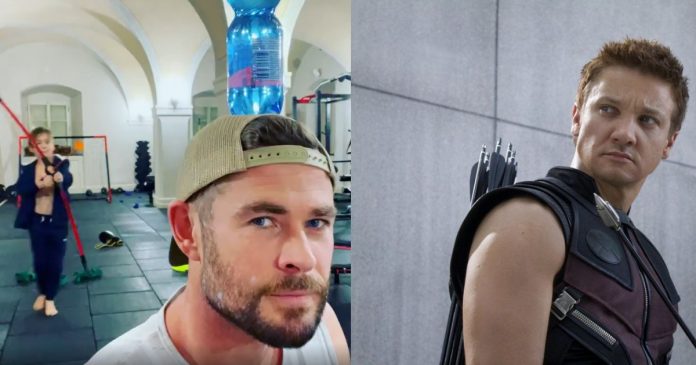 38-year-old Hollywood celebrity, Chris Hemsworth, rose to fame in the movie, Thor. With his handsome looks and muscled physique, he has been named the “sexiest man in the world.” He is one of the fans’ favorite actors in the Marvel Cinematic Universe.

Chris Hemsworth not only has a career that soars sky-high, but also has a lovely wife, actress Elsa Pataky, and 3 adorable children, India Rose, Sasha, and Tristan. He often posts photos of his loving family on social media sites, and fans leave comments or reactions to show their appreciation.

The Marvel star resorted to social media and shared a video clip of himself and his son, Tristan, enjoying a ‘father-son’ bonding moment. His son can be seen holding a bow and arrow, and Chris had a water bottle resting on his head. Practicing his archery skills, Tristan aimed for the bottle and flawlessly hit it to the ground. Netizens who saw the video were quick to call him “The Real Hawkeye” since the series of the same name was recently released on Disney+ and garnered thousands of viewers.

Chris mentioned in his post that it took 63 tries before his son perfected the shot. He was hit numerous times by the arrow at the back of his head before his son finally hit the bottle. Although Tristan only used a rubber arrow, Chris warned his followers not to try the stunt at home.

He wrote, “Don’t try this at home. Took 63 shots in the back of the head before nailing it. Worth it. This stunt was performed by a couple of lunatics with complete disregard for their own safety.” #fathersonbonding (don’t worry it was a rubber arrow)

Several fans commented and reacted, and called the duo ‘Hawkeye and Thor’. One follower commented hilariously and said that it may be a leaked scene from the Hawkeye series. Another fan commented, “When you’re Thor, but your kid is Hawkeye.” Another follower also commented if he was watching Chris’s son or the ‘New Hawkeye’.

Fans of the Marvel Cinematic Universe know that the character Hawkeye does various signature moves that make him unique from the other characters. Chris’s son made the perfect archery shot that made fans wonder if he was going to be the next Hawkeye now that the character in the series has retired.

Jeremy Renner, the actor who played the original Hawkeye, also wrote a comment on the video clip. He left three bow and arrow emojis, which meant that he was more than impressed by the young boy’s archery skills.

Chris Hemsworth is undoubtedly very handsome. Though the younger Marvel fans choose the other characters rather than Thor. Even if the character of Chris is the strongest, the children openly mentioned that they prefer the other Marvel superheroes to Thor, and Chris Hemsworth is helpless with this.