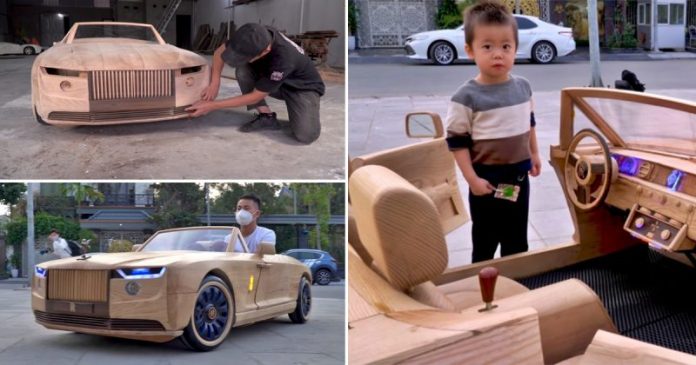 How did the people behind the infamous Flying Spur emblem, achieve this feat? Upon its reveal at the Concorso d’Eleganza Vill d’Este, the Boat Tail became the most coveted ultra-luxury vehicle in the world, owned by celebrities such as Beyoncé and Jay-Z. It is completely bespoke, with every single option available on the vehicle is down to the choice of the client.

They don’t skimp on the details either, so if you are looking to make your own boat tail, no hard plastic option here. Just to give you an idea of how exclusive this Rolls Royce is, in the glovebox you are equipped with a fully customized aluminum Mont Blanc pen with a leather case. Every Boat Tail will come in an oceanic blue color that is permeated with gleaming crystals. You are also afforded with monogrammed silverware and plates to match, if you choose to purchase this luxury for your own.

Certainly, one of Britain’s most spectacular masterpieces, the nautically themed vehicle inspired this father, who is a woodworking artist, to create a replica of the four-seater for his son. Talk about coach building on a smaller scale!

Now, this is no easy venture. To give you an idea of how difficult it is to capture that boat-like design, the designers of the original, full scale version of the vehicle took inspiration and influence from the original 1932 Boat Tail model, the lines and functions of racing yachts.

“The coachbuild represents individuals of extraordinary achievement, culture and the vision to craft an entirely origina motor car.”

That sounds difficult, can daddy really pull it off? Of course he can, and there’s a video of it too.

Taking to Youtube, ND – Woodworking Art, shows the world that he too possesses the skill and master touch of the world’s finest designers, engineers and artisans to build this smaller scale Rolls Royce Boat Tail model with his two bare hands.

He starts his video recording his son’s reaction when another kid was prancing around in a white Rolls-Royce Cullinan look-alike. Accepting the challenge, the father begins the video cutting wood and designing a vehicle that his son would be proud to drive in.

Taking 68 days to craft his masterpiece, the 16-minute video covered everything from shaping chunks of wood, installing axles and mechanical parts to move the Rolls-Royce replica.

Carving the floor panels out of wood, the car is assembled with ND- Woodworking Art’s masterful touches, which can seat two at the same time – much better than other motorized miniature vehicles in the market which can fit a maximum of two toddlers at the same time.

Using a simple chain to drive the vehicle, the Rolls-Royce Boat Tail replica had most of the bells and whistles the real Boat Tail would have – except for the two-tone blue paint job. Complete with suicide-reverse opening doors, functional lights, interior/exterior to match, and the Flying Spur, that is one happy kid!

Now that is not the only feature this daddy built for his son. If you stroll to the back (covered later in the video), the vehicle does not only drive well, but it is also equipped with features that give the Boat Tail its name – the tailgate. In the video, the boot opens up to reveal a yacht-style deck, just like the real Roll Royce Boat Tail that is filled to the brim with goodies suitable for a Sunday picnic!

Though the Rolls-Royce Boat Tail is touted as a one-off build (so far), for ND – Woodworking Art, this was not his first-time replicating automobile masterpieces as he built his son a Lamborghini Sian Roadster a few months ago.

Looking at the level of workmanship, let’s hope that there will be more up and coming projects from ND – Woodworking Art.