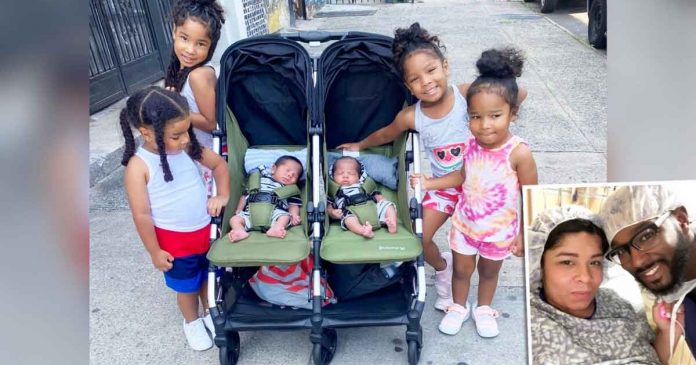 A couple has been very lucky to have 6 babies in just 5 years. They have been blessed with 3 sets of twins. These types of consecutive twin births are very rare in a couple, but opportunity knocked more than once at their door.

The couple from Brooklyn, New York, 32-year-old Jolene McKee, and her husband, 33-year-old Andrew, are now a family of 8. Nearly six months ago, they have welcomed their third twin babies, Aiden and Jaiden. Jolene felt blessed having 6 children from only 3 pregnancies and said that she has handled the second and third pregnancies like a professional, knowing that she was having twins each time.

The couple’s children are 5-year-old Peyton and Paige, both female; 3-year-old Abigail and Andrew, a male and a female twin, and now twin boys, Aiden and Jaiden, who are 6 months old.

“I never imagined myself with a big family. I think I might only have one or two kids, I feel very lucky that we have three combinations as well, female twins, male-female twins, and now male twins. It worked out perfectly,” Jolene said.

Three months before she became pregnant with Peyton and Paige, Jolene suffered a miscarriage.

“I was very afraid to go to the doctors for a scan after experiencing pain from a miscarriage. I panicked all the time because the doctors were taking so long, and they called someone into the room,” Jolene said. “Then they told me I was pregnant with twins. I can’t believe it. It’s a beautiful thing.”

After two years, Jolene found out that she was pregnant again with another twin baby. Earlier, she was already having a hunch that she was having twins again, and the couple was shocked when the news was confirmed.

“When we found out it was twins for the third time, we were in shock, and the doctor was just as shocked as us,” Jolene said. “He said that in 25 years he had never seen a woman have three sets of twins. All of my pregnancies went really smoothly, but it was very different the second and third time around being pregnant while also being an active mum. But I just had to push through. After giving birth to Abigail and Andrew, it was challenging having two sets of twins, but twins were all that we knew so it kind of felt like it got easier with each set. We knew how to handle it. After falling pregnant for the third time, I was 100% sure it couldn’t be another set of twins. I thought it would definitely be just one baby.”

Jolene explained that she has an overactive uterus that produces 2 eggs at a time, and that was the main reason why she keeps giving birth to twin babies at each pregnancy. She loves the outcome and has accepted that this has been her fate.

“Each child has their own different personalities, and although they’re twins, they each have their own little buddies,” Jolene said. “My favorite thing is watching them grow and progress. It really warms my heart.”

Jolene and Andrew admit to having challenges while raising 6 children, and it took a lot of effort to enforce a perfect schedule.

“It’s sometimes hard to keep up with all the laundry too, I do at least six loads of washing each week,” Jolene says. “But all the kids are really close and get on very well. I love our family, and I wouldn’t have it any other way.”