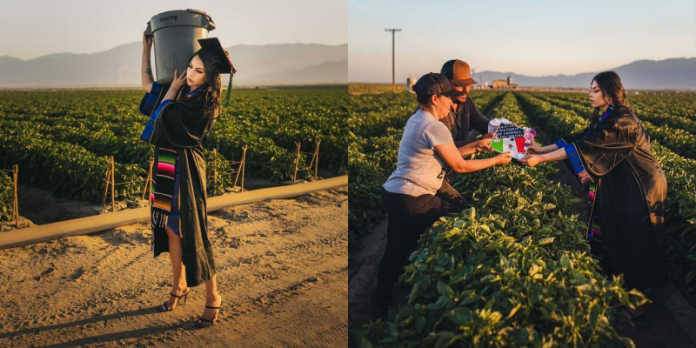 Not long ago, leading business magazine Inc, released an article entitled ‘Growing Up Wealthy Can Be a Major Obstacle to True Success’ cites that those who do not come from well-to-do families have “fire in their gut, grit and desire to wander far out of their comfort zone”.

This is one of those story.

Featured in various news channels across the globe, University of California, San Diego graduate Jeniffer Rocha took to the fields and posed for the cameras in her effort to honor her parents and their contribution to her success.

Paying tribute to her roots – the hardworking fields of her immigrant parents, her decision to commemorate her proudest moment showcasing the hardship her family through shows her humility and down-to-earth demeanor of not forgetting her roots, complete with her mortar board and gown.

“I wanted to go back to the field because that’s what molded me as a person and that’s what gave me the reason to pursue a higher education.”

“My dad’s lesson to her three girls was ‘hey, if you don’t pursue higher education, this is where you’re going to end up your whole life’.”

Telling the story of her parents’ origins, Jeniffer said that both her mother and father, Jose Juan and Angelica Maria hailed from Michoacán, Mexico. Both immigrated to Coachella, California and have since become field workers.

Jeniffer too shared that she began working in the fields herself since high school, planting strawberries until 2 to 3 am before waking up at 5 am to attend classes.

A true story of grit and determination, her work did not stop even when she attended her classes at UC San Diego.

“During winter or summer break, I was working with my parents. That’s what made me want to go back and recognize my parents, because without them, I wouldn’t have the degree.”

She did not just work in her parents’ farmers field, but at the same time worked at the university’s police department while balancing school work to help pay her study fees.

“My shifts would not end until 4 or 5 am. I’d have to be ready for class by 8 am, and will normally take a quick nap in my car.”

To save more money, she made the decision to commute back and forth from her sister’s apartment.

“It was tough times, but I got that diploma.”

Adoring her parents, Jeniffer said, “if it wasn’t for how my parents raised me, I don’t know who I would be today.”

“Coming from a field worker background has motivated me to work hard, as my parents took my sisters and I to the fields in order to understand how difficult labor is.”

Jeniffer graduated with a degree in sociology and now aims to pursue a career in law enforcement.

“Working in the fields builds and molds a different type of character. A character that does not give up, and one with resilience and strength to withstands the hazards that come from the job.”