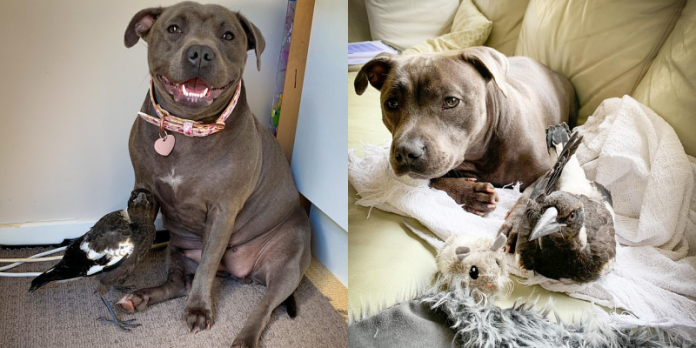 Animal stories always leaves a warm fuzzy feeling on the inside, especially the ones that tell the story of an unlikely friendship that animals form with an animal of a different species.

This is one of those stories.

Featured in the Daily Mail, an English Staffy by the name of Peggy can be found romping and snuggling with a magpie, she found abandoned and has since adopted as her own baby.

Piquing the interest of fellow readers, the act of ‘imprinting’ is commonly seen in animals – where in critical periods after birth, birds or other animals would follow the first moving object they saw.

In another argument, scientists deduced that interspecies relationships, like the ones experienced by Peggy and her baby magpie, Molly may be a result of simply the need for companionship.

According to owner Juliette Wells, Peggy found Molly abandoned and left for dead on one of their daily walks in September 2020. Despite being terrified of magpies, Peggy was extremely concerned for Molly at the time.

“We were taking Peggy for a walk when she discovered this little magpie (Molly) that was all by itself. She was weak and not well at all.”

“We didn’t know what to do as we could not locate the magpie’s parents. We finally found them, but they were at the top of the tree and would not come anywhere near her.”

Understanding that this was nature’s way of weeding out the weak, they waited for two hour but the parents simply ignored their offspring.

Having made the decision of taking the poor thing home, Wells and her partner Reece received much needed advice from local wildlife specialist on how to nurse Molly back to health…and after a week, she survived.

Caring for Molly in the first few weeks, Wells mentioned that they fed the magpie live worms and water. They even opened windows and doors in an effort to encourage Molly to fly home.

“We’ve tried to get her to fly back into nature but she has no interest in leaving us.”

“We taught her to catch her own worms and lizards, but she really thinks that she is a dog and runs around after Peggy.”

Weirdly, Wells mentioned that Peggy began producing milk for Molly despite not being pregnant or have offspring of her own.

“The couple took the dog to the vet. They discovered that because Peggy thinks Molly is her baby, she was producing milk the same way as if she had puppies of her own.”

Wells explained that Molly kept poking at Peggy’s nipples because of it.

“It is crazy to think that this could happen, but it just shows their amazing bond.”

Currently, both Peggy and Molly can be seen together, from dusk ’till dawn – cuddling, playing all day and experience a typically relationship shared between mother and daughter.