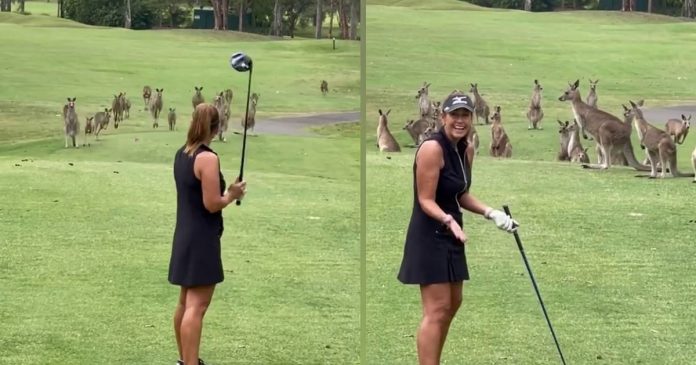 Amateur golfer from Australia is stunned as a group of kangaroos stopped nearby to watch as she was preparing to tee off. Wendy Powick was shocked and laughed in amazement upon seeing the hilarious incident. The group later dispersed and transferred to another area. The video was posted on Instagram and garnered thousands of reactions and comments.

A woman was left in awe when a horde of kangaroos stopped for a moment nearby on the golf course’s fairway when she was preparing to tee off. Amateur golfer Wendy Powick shared a video of the unusual encounter on Instagram, when she was interrupted by the group in Arundel Hills Country Club on the Gold Coast in Australia.

“Never ever seen this happen before when a whole mob of kangaroos at Arundel Hills Country Club decided to charge up the fairway and stop right at the front of the Tee box to watch me… absolutely gold and only in Australia…,” Ms. Powick wrote.

The video footage showed the golfer preparing to tee off when a horde of kangaroos emerged from the distance and came towards Ms. Powick. They stopped for a moment to watch her play.

The man taking the video could be heard in the background, “How’s this for golf today. They’ve all decided to settle in the middle of the fairway.”

Some of the kangaroos were still hopping around the golf course while the others stopped to watch the golfer play. Wendy turned and laughed at the camera, confused at the incident.

“They’ve come to watch me tee off,” the golfer jokingly said.

As the other kangaroos started to leave, some of them remained and see where the others were going next. Still a little bit confused by the group’s sudden dispersal, Ms. Powick said: “What’s going on?”

Wendy’s amazement was still visible even when the group left for another area in the golf course, each kangaroo following one another.

The golfer waited until the last kangaroo left then resumed her game.

One user wrote: “Amazing! How good are the roos on the golf course.”

“That’s an audience!” said another.

While a third said: “Please no jumping in the gallery.”

Other golfers who saw the video reacted that they would surely feel the pressure when they encounter a group of kangaroos coming towards them. “It will be too much to handle.”

“No pressure trying to tee off now that the crowd has rolled in,” said one.

While another wrote: “I don’t think I would trust myself to hit over them.”

Here is another video of the incident posted on YouTube: