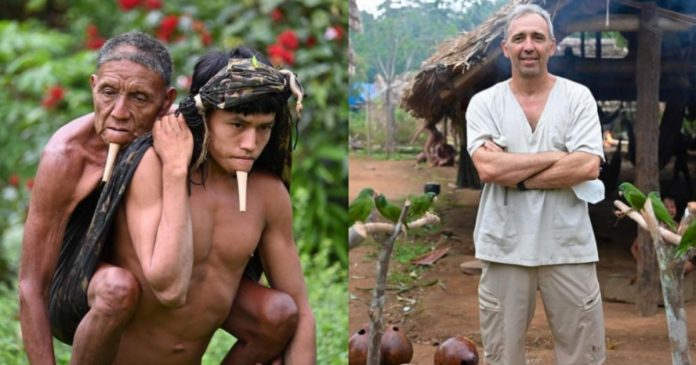 Termed ‘the most memorable moment of 2021’, the scene moved a lot of people, including the person responsible for the picture Dr Eric Jennings Simoes, who the picture with his camera.

According Dr Simoes, Tawi was carrying Wahoo on his back, as the 67-year-old man was suffering from vision impairment and chronic urinary problems, making it difficult for him to walk.

“This shows the lovely relationship they share with each other.”

“The son carried his father over the hill, across valleys and various obstacles.”

According to Dr Simoes, the picture was a testament to how complex a vaccination campaign can become, especially in areas involving some of the world’s most remote communities.

He adds that Tawi’s motivation was down to the fact that he did not want to his father fall ill due to the pandemic.

Sharing most of his experience on his Instagram account, Dr Simoes shared that indigenous people in Brazil were considered the primary group.

“They are so spread out, that if officials wanted to go from village to village, it would have taken weeks to vaccinate them.”

“Through radio communication, communities were informed about the vaccination.”

Currently a total of 853 people from these communities have died because of Covid-19, but reports mention that the numbers could be higher.

Sadly, Wahoo passed away in September 2021, but Tawi managed to complete 2 full doses of his vaccination.

Our thoughts go out to Tawi Zoe and members of his tribal community for the loss of his father Wahoo.

Woman from China raised 87 orphans for over 40 years all...