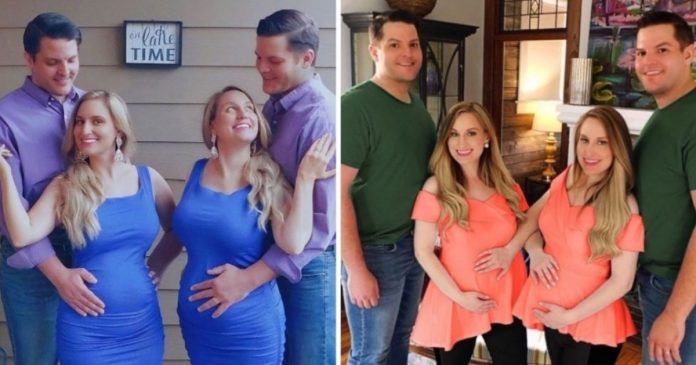 Twin births are uncommon, though there are many cases around the world. It may be difficult to tell one from the other, though the fact is, all twins have their differences, too, may it be physical or their behaviors.

▼The two pairs of twins met at a festival held in their hometown in Ohio, every August, the Twin Festival is celebrated. Twins from around the world can gather together at the festival, mingle, and get to know one another. Brittany and Briana attend almost every year. It was in 2017 when they met twin brothers, Josh and Jeremy at the festival.

▼In early 2018, the two pairs of twins married. On their wedding day, Brittany and Briana wore wedding dresses that look the same, look exactly the same because of their make-up, and walked down the aisle to their groom behind twin flower girls scattering petals on the carpet. The scene was picturesque!

▼After marriage, they all moved into the same house, living under one roof. The twin sisters like to wear the same clothes, so do the twin brothers. In photos, they like to pose the same way. Heads turn their way when these two pairs of twins go out together.

Incidentally, Brittany and Briana got pregnant at the same time and visit the same OB-Gyne doctor. The two sets of twins were informed that they only had two different types of DNA. Chances are, their children may look alike. Cousins may rarely look like they are twins, even if they were born from different parents.

These two pairs of married twins are amazing! ❤️