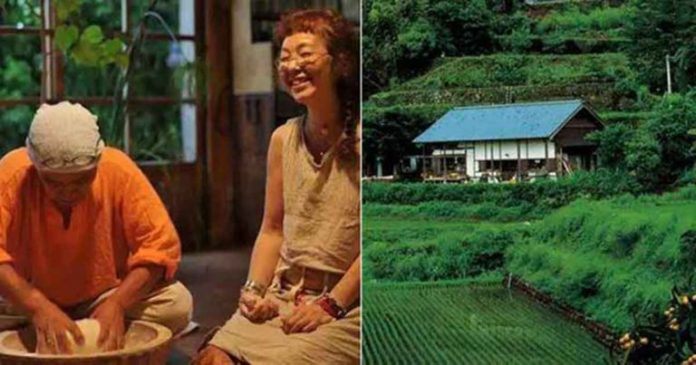 Teppei Ono and Yumi Hayakawa may seem to you like many Japanese people who choose to live in villages where the real soul of Japan can be found.

Secluding themselves to a place where traditions are maintained, secrets are hidden and new ways of life emerge, to understand a culture, the village offer vastly differs according to various prefectures, especially to this couple who chose to live 450m high in the mountains of the Koch Prefecture, Japan.

“I have always dreamt of living in a small house, where the air is cool, where my house is surrounded by shrubs, where I get to plant flowers, read a book and drink tea in peace.”

“But things were not easy at first. There were a lot of things that we had to leave behind, and it was difficult for us to move forward with our dreams.”

Despite all the hardships, both Teppei Ono and Yumi Hayakawa managed to become the select few who managed to fulfill their dreams.

To them, “being able to drink tea in the morning, serenaded by birds” was the ultimate dream.

Having left the hustle and bustle of city life in 1985, this Japanese couple chose to live in seclusion at the Yaxiang hills in the Kochi Prefecture. Choosing a simple life, living as farmers that is where their adventure began.

Gone away are the banes of traffic jams, noises of industries, and welcome the boon of nature and peace every time they wake up in the morning.

“We now live in a small house that was built by my husband, with greenery all around us and the woods in the back.”

“As you step outside, paddy fields greet you with endless amounts of green especially during planting season and the summer months.”

Teppei Ono and Yumi Hayakawa are celebrated artists in the world of pottery. choosing to live in a remote village, this duo are responsible for the creation of pottery and woven art that best encapsulates nature into their creations.

57-year-old Woman Lives Alone Happily in a Mobile Home, Occasionally Moving to a Different Environment and Enjoying Life on Her Own