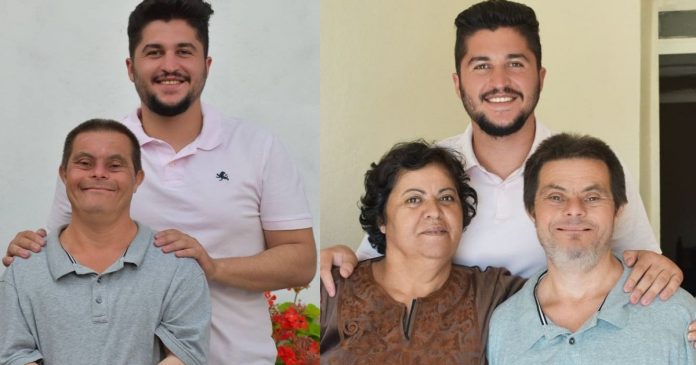 People have so many misconceptions about individuals with Down Syndrome. Rumour has it that they can never have children. The fact is, women with Down Syndrome can get pregnant and bear children, while the men can be fathers, too.

A man from Syria who has Down Syndrome named Jad Issa married a beautiful woman, and they welcomed a son. When the boy grew up, he became a successful doctor.

This is a heartwarming story about a family in Syria who proved to everyone that selfless love is the most powerful trait a person can share with family, friends, and even strangers. In return, abundant blessings shall be reciprocated.

When Jad and his wife welcomed their firstborn son, Sader, he became their world. He was pampered and so much loved. When he was still a child, Sader remembers his father playing games with him like wrestling, thumb wrestling, among others. They were supported and treated fairly by the neighborhood and have been accepted as a normal family.

Jad worked in a wheat mill and did his best to save money for Sader’s college education. He had big dreams for his son and supported the family the best way he could. This inspired young Sader to study well and eventually become a doctor, since his father has given him the best future.

“I think I would’ve been much less excited about life and much less passionate about what I do if I didn’t have my special father,” he wrote as a caption in one of the photos on social media.

Sader has dedicated his success to his father, and Jad, in return, has felt overwhelmed. Sader is now a very successful dentist and is one of the highest paid in his hometown in Syria. With a twinkle in his father’s eyes, Jad is very proud of Sader and exclaimes, “My son is finally a doctor.” Jad’s happiness is immeasurable from what Sader has fulfilled.

Sader’s parents have been together for many years, but their love still grows like they have been married just yesterday. They get along perfectly and understand each other well. They still go on walks or just sit and talk with each other for hours. After all these years, their sweetness never ceased.

The photos Sader shared on his Instagram account show the pride and joy that his family shares. Sader admits that he gives credit to his father for his success in life, and Jad feels proud of his son just the same. These father and son love to bond during their free time by watching the latest movies.

Share this heartwarming story to family and friends, or share it on your social media page to touch someone’s heart and to spread the good vibes. #FeelGood

Sister Knees Down to Thank his Brother who Drops Out of...