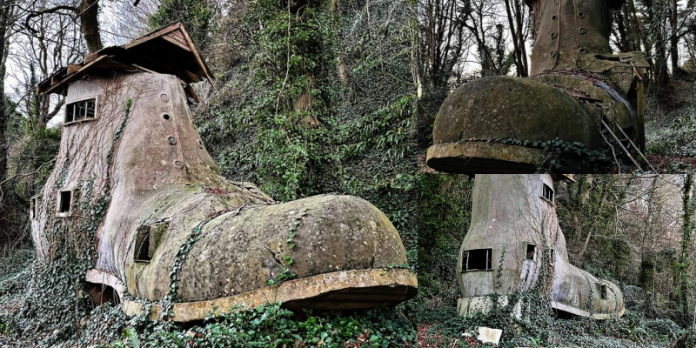 There was an old woman who lived in a shoe. She had so many children, she didn’t know what to do. She gave the some broth without any bread; And whipped them all soundly and put them to bed.

To what began as a simple nursery rhyme for children, many have assumed that it would be impossible to entertain the idea that a woman can be found living in a shoe – until that is, a group of urban explorers unearthed a boot-shaped house hidden deep inside some woods in the UK.

Of course they never found any woman living inside it, as the property in question is slowly reclaimed by nature, with leaves, vines climbing up its moss-covered walls and falling roof.

Peering through the windows, the urban explorers found that some of the structure has collapsed, noting that the property is deemed unlivable with a post on the Abandoned UK Facebook page stating that a woman once lived there in the 50s!

The explorers explained: “This took some finding but we did it, so after walking through the woods for ages trying to find the boot we finally saw it at the bottom of a steep cliff.”

“We eventually made it down in one piece almost like rock climbing at some stages. Apparently, a woman lived in the boot in the 1950s.”

“Although there isn’t anything stating this just stuff we have read online.”

“Kids used to play on the boot in the 70’s & 80’s as well, this is definitely something different and the detail that went into making it. The small video below hope you enjoy it.”

A Mother in Taiwan Gives Her Son an “Old Man” Haircut...