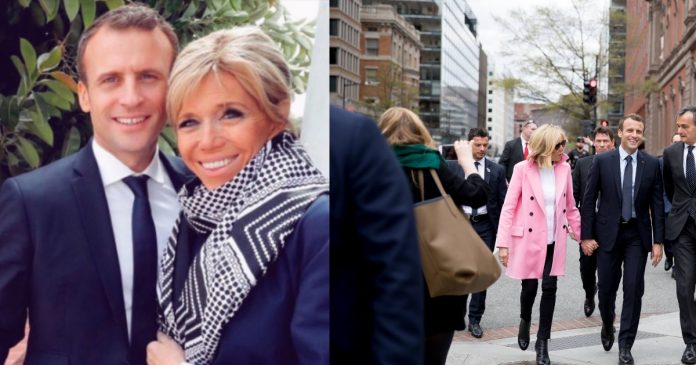 Although President Macron’s marriage to his teacher who was 24-years younger to his wife, the couple felt that they both are perfect for each other. Thirteen years after they met, they finally married.

French President Emmanuel Macron and his wife, Brigitte, have a 24-year age gap, and it turns out that they have a back story. Macron met Brigitte when she was still his teacher 18 years ago. Although a student-teacher relationship has always been forbidden on campus, Emmanuel and Brigitte still dated and chose to overcome trials and problems. 13 years later, the couple married. In 2017, Macron the president in France, the youngest in French history. He was always the focus of the media and paparazzi, and citizens opposed to their relationship.

Unwilling to be a housewife, she went back to school to be a middle school teacher
Macron was raised in a small town in central France. His family lived a life of affluence. His parents were doctors, with good education and living in a beautiful environment. Brigitte Trogneux is also popular in her time. Her father owns a chocolate factory, and they are wealthy. She married André-Louis Auzière, a banker, at the age of 21. They have 3 children: 2 daughters, Tiphaine and Laurence; and a son, Sébastien.

At the time, it was tradition for women to stay at home and take care of the children, though Brigitte refused to be a housewife. She broke the tradition and went back to school, assuming that women can also work and have a career. She did not like the idea of revolving her life around family only and staying at home. At the age of 36, she succeeded in acquiring a degree and landed a job teaching French to students in middle school.

Fate brought them together through Drama classes
Macron was a student at the middle school where Brigitte was teaching, and they met when he was in her drama class. Macron always dreamed of becoming an actor and joined the school drama club. Incidentally, Bridget was his drama teacher who discovered that Macron had the talent for acting. She mentored him and taught him about life’s philosophies that helped enhance his skills. At the end of a performance, the two shared a kiss on each other’s cheeks that made Macron fall in love with her more. He did not seem to care that she was 24 years older than him. The simple gesture ignited a spark in his heart. He started joining her in writing a script for a play. This was his excuse to get closer to Brigitte. He would even call her to discuss the script which took hours to end.

Although their relationship was opposed by everyone, Macron assured Brigitte he would marry her someday
Traditionally, the teacher-student relationship is opposed, not only on campus but elsewhere. What’s more, not only is she married and with children but also is 24 years his senior. Their relationship received a lot of bashes. When Macron’s parents learned of the “immoral relationship”, they immediately sent their son to another school in Paris to keep him away from Brigitte. His mother interfered and attempted to cut off the relationship, warning Brigitte to stay away from her son. Macron and Brigitte had such strong love for each other that she responded to Macron’s mother: “I can’t make that promise!” Macron, on the other hand, was only 17 years old when he made a promise to Brigitte: “No matter what you do, I will marry. you!” The unwavering love between the two rekindled 13 years later.

Brigitte carried his surname
Through the years, the love between Macron and Bridget did not falter, and they have overcome all hardships and bashes. They finally married in 2007, when Brigitte was 54 and Macron was 30. At the time, she was a mother of 3 adults and a grandmother of 7. During their vows at the wedding, Macron said, “I know we are an unusual couple, though I don’t like to describe it this way, it does exist. We both know that we are suitable for each other.” Brigitte carried his surname, Macron, after marriage. Macron, not minding the change, said, “As long as she is in my life, it doesn’t matter at all.”

Proved to all people that they were “perfect” for each other
The couple is married for 14 years now and is still very much in love. They have proven to each other and everyone that they are the perfect couple. They stand side by side in all events they attend holding each other’s hands tightly. Although he has no children of his own, Macron has considered her family as his, and regarded her grandchildren as “our grandchildren”. His life as France’s president not only revolves around politics but with people, too, especially children. Macron not only loves Brigitte deeply, but has accepted her family, her past, and has built his world around people they both love. Macron is not afraid of ridicule and bashes and dares to pursue the love they believe in. He broke everyone’s vision of stereotyping unusual marriages, and in the end, has successfully won the hearts of the French people.

A Well-Behaved 3-year-old Boy Patiently Waited for Two Hours Outside an...