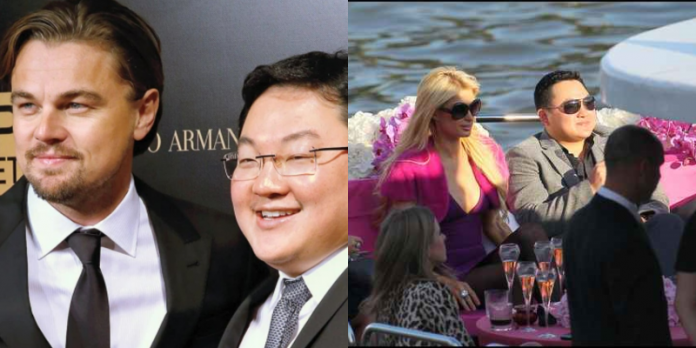 Though his whereabouts may be a secret, it cannot be the same for his lavish lifestyle, as details of his spending came to light during a trial in Brooklyn Federal Court, New York, in recent times.

According to Roger ng, a former Goldman and Sachs Group Inc. banker, these numbers were among the expenses revealed to jurors in his federal conspiracy trial.

A witness also revealed that millions of dollars were allegedly stolen from 1MDB and had been used to fund Jho Low’s extravagant lifestyle.

To give you an idea of how lavish his lifestyle is, Jho Low once spent USD$100,000 for 65 bottles of Cristal Champagne and tipped bartenders as much as USD38,955.

DiCaprio was not the only one Jho Low has invited to party with him, though in the distinguished list we are about to reveal, named him among the highest paying star to make an appearance.

It was described that Jho Low partied like there was no tomorrow. Apart from making an appearance at his parties, he also paid celebrities to be his date for events that he attended.

He was also known as a person that would throw huge amounts of cash during the birthdays of some celebrities.

1MDB is a government owned company intended to promote economic development in Malaysia. Instead, it was subject to a complex scheme to embezzle billions for the benefit of a handful of well-connected conspirators.

Jho Low was part of Prime Minister Datuk Seri Najib Tun Razak’s inner circle. Though he has never held a formal role in 1MDB, he exercised significant control over it.

The Former Malaysian leader Najib Razak lost his appeal against a corruption conviction and 12-year jail term December last year, with the Judge Abdul Karim Abdul Jalil admonishing his actions a “national embarrassment” but allowing him to remain free.