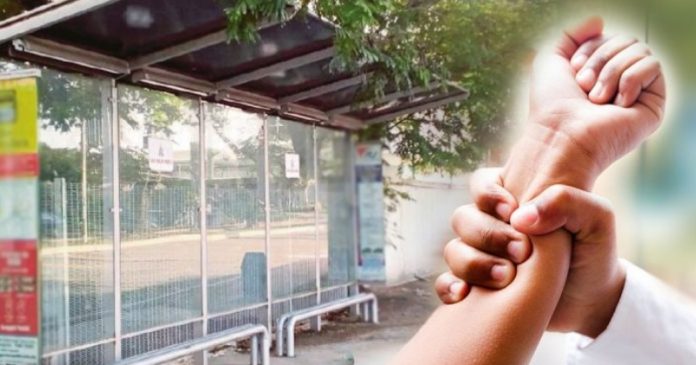 Taking place in Osaka Road, netizen Shirlee Tsai shared a story of one child nearly becoming a kidnap victim if she had not intervened, while waiting for a bus home.

“I can’t believe that something like this would happen right before my eyes.”

“As I was taking my daughter home from school, we went to our usual bus stand and waited for the bus to arrive.”

“It was a quiet day, and there was only another schoolgirl at the bus stand.”

Thinking that it would just be another normal day, it turned for the worst when the lone schoolgirl was approached by a couple no one thought would be kidnappers.

“I saw a woman coming from my left, dressed neat and tidy with her male partner.”

Feeling that things could get out of hand, she observed the situation further before taking any action.

“After a series of questions and answers between the girl and the couple, I made the decision to approach her and ask questions of my own.’

“Do you know them?” There was no answer, only her eyes widened at the question.

Tsai asked again: “Do you know them?”

At this moment, the aforementioned lady went on the offensive. She shouted: “Is it wrong for us to get to know her?”

Not wanting further confrontation, Tsai simply nodded and mentioned that the situation was weird to her.

“This is not NORMAL!”

Eavesdropping on their conversation, the mysterious lady suggested that the couple could send the little girl to her destination as they were headed the same way.

“I know where you’re going. Come with us. Our car is not far from here.”

“I noticed that the lady’s hand wash shaking, while insisting that the little girl followed them to their car.”

At this moment, Tsai shouted a little louder asking the little girl whether or not she knew who the couple was.

Startled, the lady shouted at Tsai saying that they knew who the little girl was, before the would-be victim shouted, “Help get them off of me.”

“Hello, can I speak to her father? My name is Ms Tsai. Your daughter is with me at the bus station nearby her school.”

“Your daughter was about to go away with another stranger. Would you like to talk to her first?”

The girl went on to speak with her father in a weak and frightened voice before returning the phone to Tsai.

Thanking Tsai, Tsai explained that as a mother, she too would have been worried if anything were to happen to her child. Assuring the father that Tsai will accompany his daughter home, Tsai ended up sending her home for the day.

“Though I missed two buses to save that little girl, it was worth it.”

“I thought to myself that from this day on I should be a little more courageous. It is better to be in a misunderstanding than contribute to a tragedy.”

Parents lost their four-year-old son at a train station and have...