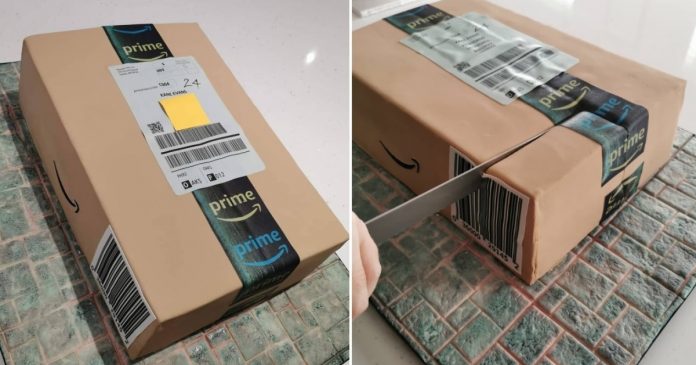 It is not surprising that online shopping has become a trend when the pandemic hit. When the whole world went on lockdown, almost everything closed. After a while, even when the lockdown was lifted and protocols were in effect, some people would rather stay at home and do their shopping and buy groceries online.

A Welsh mother, Nina Evans Williams, runs a cake shop. During the pandemic, she noticed that her son would shop online, and packages would arrive in their home almost every week. To surprise him on his 24th birthday, she baked a cake that looked exactly like an Amazon courier package. When Kane saw his cake, he thought that an Amazon package has arrived, but was surprised to find out exactly what it was.

▼It took 2 days for Nina to bake Kane’s cake. She said: “Kane often receives couriers and has his parcels almost every week. He already loves to shop online, and he’s shopping online more during quarantine. I think it’s a good idea to make a cake in the shape of a parcel for him to celebrate his birthday.”

▼Nina did not allow Kane to visit the cake shop when she was still baking so as not to spoil the surprise. When his birthday arrived, she said, “There is a package for you on the table.”

Kane did not expect the surprise, thinking it was just one of his orders that arrived. When he got closer, he realized that the package was indeed a cake, not a real package from Amazon. Kane was impressed! The details were precise, the shape and color is restored like a real Amazon package. Kane admits that he thought it was a package, but he was wrong…

The Amazon package 4-layered chocolate cake was the biggest surprise Kane got this year from his mom. He was very impressed, and no matter how many real courier packages he receives, this cake will top them all. When Kane found out about his surprise, this one is the best!

Putting Salt at the Entrance of Your Home is Surprisingly Useful. Here’s Why.

Emotional Reunion for a 65-year-old Woman and Her 84-year-old Biological Mother Who She Finds on TV Show, Long Lost Family

Mechanics Had Messed Up Her Car’s Badge, Secretary Only Find...