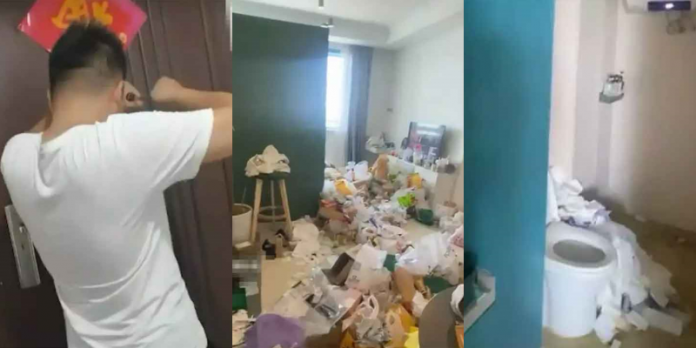 Finding the right place to rent may be difficult at times, but renting you home to the wrong and irresponsible tenant can be a nuisance too.

On social media, one netizen was made to face that reality when he landed himself in a nightmarish consequence, having rented out his home and finding out that it has been left in an unimaginable state.

Taking to social media, a homeowner felt weird when the tenant, an attractive young lady, could not be contacted by the home owner.

“Realizing that the situation was getting out of hand, the homeowner decides to pay a visit to his apartment, only to find that the locks are swapped out.”

“Two months ago, he rented his how out and it was only recently that his tenant had problems in paying her monthly rent.”

Sharing that the tenant made a number of excuses, that was when he made the decision to pay his home a visit.

They were shocked to find that the house was in shambles, full of trash and the air-conditioning still running.

Strewn with food containers, dirty clothes and trash as high as the walls, furniture provided by the home owner was also damaged.

Perturbed at what he saw, the homeowner made the decision to call on 4 cleaners to begin cleaning his home, which took almost a day to complete.

Looks were indeed deceiving, when the homeowner recounted his experience.

“Never in his mind would he thing that a well dressed lady, can live in a pigsty and was irresponsible enough to leave without so much as a goodbye.”

As seen in the pictures, the house is left in a dirty and filthy state. Not only did the living hall look like a wreckage but the bedroom as well as the bathroom, were never taken care of.

Can you imagine yourself living under this condition?

Japanese runner with fractured leg crawled her way through so that...