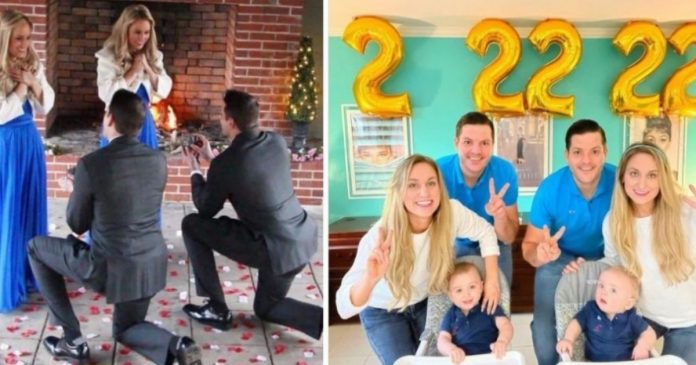 Some incidences had happened wherein cousins are born on the same day. Though there are rare cases wherein a parent gives birth the same day as the daughter-in-law, making the aunt or uncle the same age as the niece or nephew.

▼ Twin sisters from Virginia, USA, Brittany and Briana Deane, fell in love with twin brothers, Josh and Jeremy Salyers. The girls always dreamed of having their own family when they grew up but did not expect to marry twin brothers. They met while attending the Twins Annual Meeting in August 2017. A year later, the two couples tied the knot.

▼ After a year of dating, Josh and Jeremy knelt at the same time to propose marriage to their girls while they were out on a date. Brittany and Briana happily agreed and immediately accepted their proposal. They were planning to form one big happy family and broke the news to their relatives.

▼ The two couples married on the same day, with the twin girls, Brittany and Briana wearing wedding dresses that looked exactly the same. They were also pregnant at the same time, assuming that when their kids are born they may be of the same age. There is a chance that their children may look like they are brothers since Brittany and Briana, and Josh and Jeremy, are twins. The genes of the two babies may be alike.

▼ The two couples live together in 1 house, sharing the responsibilities of raising their children together. Most people wonder why their children look like they are brothers when they are actually cousins. How can they have inherited the same genes? Since both couples are identical twins, there is a possibility that they all carry the same genes. Their offspring may have the same DNA, too.

▼ The couples are content living under one roof, and they are happy with their current home situations. Though there are people on the internet who have seen their lifestyle and have a different reaction than the people closest to the couples.

“We’ve been asked a lot of questions about our life situation, and we don’t really mind talking about it,” Jeremy said.
Briana added, “I know our situation is special, but we feel like it’s a special fate.”

Josh, Jeremy, Brittany, and Briana ignore all the bashers and negative comments they receive and are very thankful to all their family members and friends who have supported them. As of late, they still have not yet decided whether they will have more children. Their children are still very young and are close as brothers. The kids have each other and will surely support one other the best way they can while growing up together.