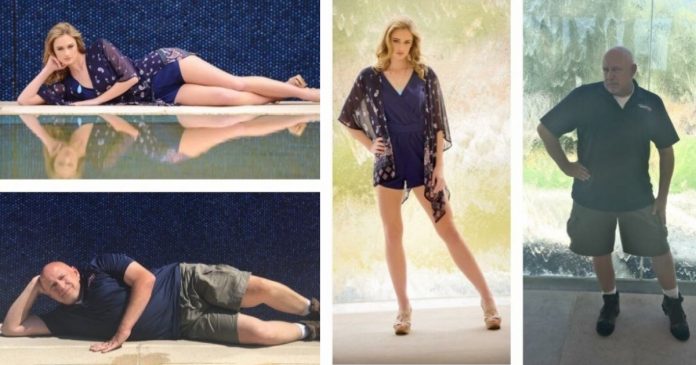 A father can be the most hilarious member of the family, especially when they have a daughter they are very fond of. Through the years, we have always heard of some women being called “Daddy’s girl.” The closeness of a father and his daughter is unbreakable, a bond that will last forever.

A female high school student from Arizona, USA, won a national modeling competition and got the chance to travel to Las Vegas, Nevada, for a photo shoot. Kendel Divarco‘s dream of having a photo album of her modeling stint has come true. What Kendel did not expect was that her parents were at the same hotel where she had her photoshoot session. Due to opportunities connected to their work, they stayed in the same hotel. Her father’s surprise made her laugh so hard she had tears in her eyes.

When her father realized that his daughter has a photo shoot at the same place they were checked in, he surprised her with his own version of her poses done in the photos. He found 8 of her photos and imitated all the poses, and took pictures at almost all the same spots. He did all the same facial expressions and body postures. He was good!

Check out that lip pout…

“Actually, I’m not too surprised, because my parents, especially my Dad, usually do these crazy things. But it seems a little disturbing because my dad seems to be doing better than me,” Kendel jokes but feels impressed and proud.

“In fact, it was my mother who helped my father take pictures,” Kendel added. When the family finally got together, they did not pass the opportunity to take a family photo while they were still in Las Vegas.

Kendel must be very proud to have such humorous parents. They, too, have supported her rising modeling career. The photos of Kendel’s modeling stint alongside his father’s interesting mock modeling photos have gone viral on the internet.