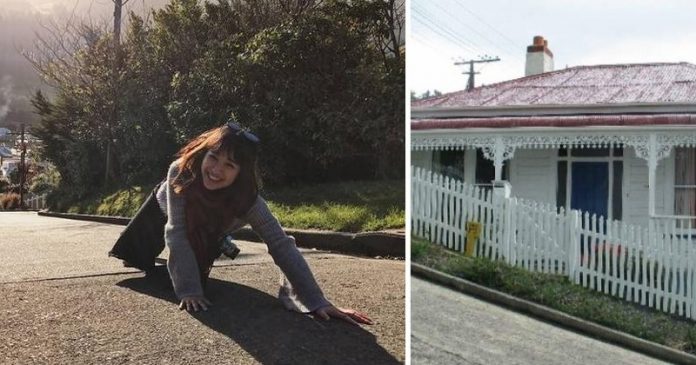 Residents are literally crawling home every day on the steepest road along Baldwin Street in New Zealand. It feels like climbing up 25 floors of a building when you walk uphill. Once they get there, tourists take a photo of the famous lopsided building that has been a tourist attraction for years.

When people live in a condo unit or an apartment building, they usually choose the higher floors to live in so they may enjoy the beautiful scenery outside their windows in the morning. Most of them say that the higher floors keep them away from the noise of the vehicles on busy streets around the building. If you live in a building without an elevator, they will surely choose the lower floors since they would not want to feel tired at the thought of having to climb a flight of stairs.

A street in New Zealand is very steep that the residents feel like they climb a 25-story building just to get home at the end of the day.

The steepest street in the world

The edge of Baldwin Street is the valley of Lindsay Creek, which continues eastward. The bottom part of Baldwin Street is made of asphalt. The slope is made of concrete since the slanting street is relatively made for people to be able to climb with ease. There were 2 reasons why asphalt was not used for paving: to prevent asphalt from melting during the hot summer and flowing down the street, and to prevent it from freezing come wintertime.

Many of the residents either lean over or literally “crawl” on the street just to get home, especially when some of them are not physically fit to climb. On rainy days or snowy winters, the people take extra precautions while they “climb” to prevent themselves from slipping.

“How could they build the street like this?” Residents joke, hoping not to offend the workers who designed the steep street.

How it all began

Baldwin Street cannot be overturned and rebuilt, hence the residents reluctantly have accepted its design. To relieve their stress on this, the residents came up with the “Baldwin Street Challenge” race that started in 1988 and is held traditionally every year on this street.

A charity event was added to the festivities in 2002, and it has carried on since. In the event, more than 10,000 round chocolates are rolled down from the top. Each chocolate represents a sponsor, wherein they receive prizes, and the funds raised are donated to charities of their choice.

The residents have transformed the stressful situation of everyday climbing into a fun activity, giving the street a memorable meaning. If you are in the area when the festivities are ongoing, would you like to join in? Would you sponsor a chocolate ball for the contests?