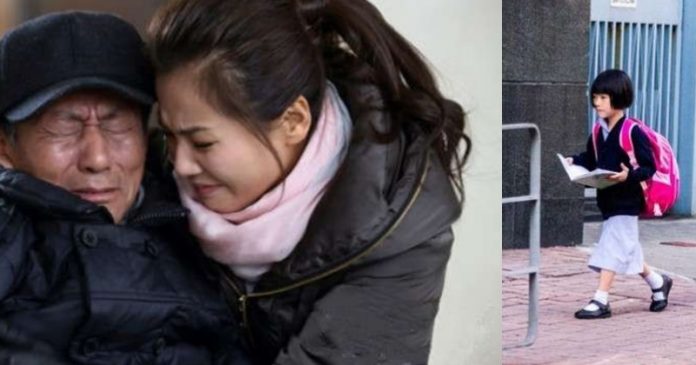 (Images for illustration purposes only.)

A 7-year-old girl never forgot the kindness a noodle restaurant owner has given her for 5 years. She repaid him by treating him like a father and protected him for the rest of his life when she returned after 25 years.

65-year-old Dong Nianhe formerly owned a noodle restaurant that he has been operating for decades. He is unmarried and has no children. Though he noticed that for 5 years and still ongoing, he has been receiving finances of US $7,855.00 (50,000 yuan) a month from an anonymous sender. Now he has more than $100,000.00 since he saved all the money. This gesture by an anonymous person made Dong Nianhe’s neighbors envious of him, though no one knew who sent the money until one day, a woman came forward.

25 years ago, Dong Nianhe ran a noodle restaurant. Every afternoon, he would see a girl around 7-years-old standing in front of his restaurant, looking very hungry. She would stare at the pot where he cooked, and Dong Nianhe would give her a glance that meant he understood.

One day, when there were not many customers in his store, he saw the little girl again. He cooked a bowl of noodles and approached her. “Hungry? Come, eat while it’s hot.” The little girl hesitated at first, so he said, “Don’t worry, there’s nothing wrong with this, I’m not a bad person.” She raised her hands in the air and said, “I, I…have no money. Grandpa said that you can’t accept other people’s things if you have nothing to give in return. Even if you accept it, you have to exchange it for equal value.” So she refused.

He noticed that the little girl, whose name he discovered was Yin Canlian, had nothing of value to offer him in exchange for the noodles. Her clothes were covered with patches. So Dong Nianhe put the bowl of noodles on the ground and reminded her that it was for free. She need not pay. But the little girl still did not accept the free food. Instead, she ran away. Curious, Dong Nianhe asked around for anyone who knew the little girl. It turns out that 5 years ago, her parents went out to work and never came back. She lived with her grandfather since, and they depended on each other, living in a dilapidated house. When she came home from school, she would do farm work and cook dinner. Dinner is usually only a pot of white porridge.

This broke Dong Nianhe’s heart, so he came up with an idea he knew the little girl would not refuse. When he saw Yin Canlian again, he said, “As long as you teach me to write a word every day, I could give you a bowl of noodles.” The little girl could not believe that he came up with such a brilliant idea, though she said timidly, “Can I write two? I want to exchange for two bowls of noodles.” At that moment, Dong Nianhe knew she was giving the other bowl of noodles to her grandfather, so he cheerfully replied, “Of course, you can.” When the customers saw this, they deliberately made fun of him and said, “Hey, Boss Dong, let’s get us ten bowls of noodles first, and we will teach you how to write a hundred words.” Instead of retaliating, Dong Nianhe just kept silent.

Since then, Yin Canlian came to teach Dong Nianhe some new words each day for a bowl of noodles, and this exchange lasted for 5 years. Though after she graduated from elementary school, Dong Nianhe noticed that she no longer passed by his restaurant. She and her grandfather have disappeared. He discovered that a distant relative of Yin Canlian took them into their care and brought them to the city.

▼Fast forward 25 years later, Dong Nianhe’s small noodle restaurant has become a local specialty snack shack, and he has also become an elderly man over 60 years of age. Since he could not bear children since he was young, his 2 marriages ended in divorce, and Dong Nianhe never had children. For him, it was quite lonely having aged without a family. But every day for 5 years now, he was wondering who has been sending him US $7,855.00 (50,000 yuan) every month since no letter or note is attached. Neighbors have noticed this and have been envious of his fortune, though they advised him to close his noodle shop and stop working.

▼Dong Nianhe never mentioned to them why he was still working in his noodle shop. He was still waiting for the little girl he sees across the street in the early afternoons. Although the establishments across his noodle shop have changed through the years, she may still be standing on the usual spot where she waits. He muttered to himself, “Because I’m waiting for someone. If the noodle shop is closed, I’m afraid she won’t find her way here.” Dong Nianhe still waited for the little girl with the red school bag who waited in front of his restaurant every afternoon. He still remembers her like it was yesterday even though it was a long time ago.

▼Recently, the establishments in the neighborhood where the noodle shop was located were about to be demolished. At this point, Dong Nianhe has become absent-minded when he was working. The customers often reminded him, “The batter is batter, boss, the batter is batter.” Instinctively, he would always look at the spot where the little girl stood across the street. One day, when he looked, he became stunned. The tableware and chopsticks he was carrying fell to the ground. There she was! She may have grown older, but it was definitely her, as he recognized the little school girl with the red bag. The woman entered his noodle shop with tears in her eyes and said, “Dad, I’m back!”

Dong Nianhe ran to her excitedly. In his heart, his daughter has returned. He then discovered that she has been returning to his neighborhood every month since she started working, secretly watching him at his noodle restaurant and sending him money every month when she receives her salary. She willingly paid him back for the kindness he has given her for 5 years through a bowl of noodles. He was willing to help her in her most difficult time when she was a little girl.

Now that Dong Nianhe is an elderly man and needs someone to take care of him, adult Yin Canlian finally had a reason to come back. She said to him, “Dad! You were kind to me for five years. You fed me when I was hungry. Now, I will protect you for the rest of your life!”

ABOUT US
GoodTimes provides you interesting daily feeds of videos, stories and news.
Contact us: goo[email protected]
FOLLOW US
© Copyright by GoodTimes
MORE STORIES

Authorities Gifted Single Mom A Van, After Finding Out About Her...

3-year-old Child from Pennsylvania Sneaks Her Pet Fish into a Sippy...