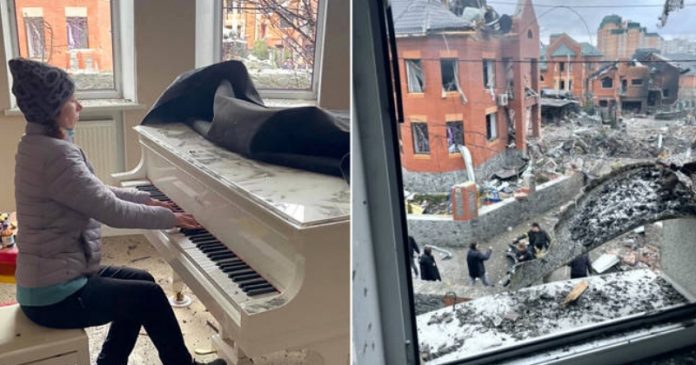 Before fleeing her ruined home and being forced to leave their city, a Ukrainian pianist named Irina Maniukina played a piece composed by Chopin on her piano one last time.

As her family was preparing to leave their home that was destroyed by a bomb, a pianist decided to play a piano piece composed by Chopin. The grand piano meant so much to the family that she brushed away all the ashes from the keys before she sat down and filled the air with music one last time.

48-year-old Irina, a mother of 2, played Chopin’s Étude Op. 25, No. 1 (Aeolian Harp) after taking a deep breath and composing herself. While she was playing, her daughter, Tiktok user Karina scans around the ruined house and took a video of the rubble, pieces of crashed glasses on the ground, debris, and what was left of their home.

Karina shared a separate video she took from their window whose glasses have been blown out and shattered to pieces. Earlier, a bomb exploded 30 feet away from their home in Bila Tserkva, south of Kyiv, and their neighbors have gathered around the huge hole on the ground where the bomb has landed.

In the video post where her mother was playing the piano, Karina writes: “Do not judge, my mother is a professional pianist and decided to play to let go of this case.”

The video of Irina has garnered more than 2 million views on TikTok and has been shared by netizens on different social media platforms. Some of them have compared her video to the 2002 film starring Adrien Brody, The Pianist.

BAFTA-winner Howard Goodall, a musician and composer, said that it was heartbreaking when he viewed Irina’s video. For him, it was an irony that she played Chopin, who had a similar incident of fleeing his country when the Russians invaded. Goodall also compared the ongoing war to the November Uprising, known as the Polish-Russian War that occurred from 1830 to 31.

Karina said that there was no warning before the bomb landed and exploded near their home. Everything was quiet and peaceful. No sounds of planes passing and no loud sirens. All the people saw was the “orange and black” cloud after the bomb exploded.

“After the explosion, everything was smashed and in ashes,” Karina said. “I looked around the house and saw that a fire was starting in my brother’s room. I had already called my mother, and they rushed as quickly as possible. They couldn’t drive straight to the house. Since the wires just lay on the road. They ran into the house and all together ran to put out the fire.”

“After that, everyone breathed a sigh of relief,” Karina added. “Then my mother decided to gather her thoughts and sit down at the piano.”

It was not a sad moment for Karina, seeing her mother play the piano for the last time. The music made her reminisce the good memories they have built in the house.

“My mother has been playing all her life, and she even graduated as a pianist,” said Karina. “She played because she wanted to forget about the war and her worries for our safety at that moment.”

The family and their neighbors were forced to flee the ruined city. Last week, they all took a 300-mile journey to Lviv, a Ukrainian city in the west.

Since Irina and her family discovered that all the apartments in Lviv have no vacancies, they are not losing hope to find a suitable place for them and be able to settle immediately. As Karina has posted, “they’re all occupied.”

A Mother from Tennessee Gives Birth to a Baby Girl After...