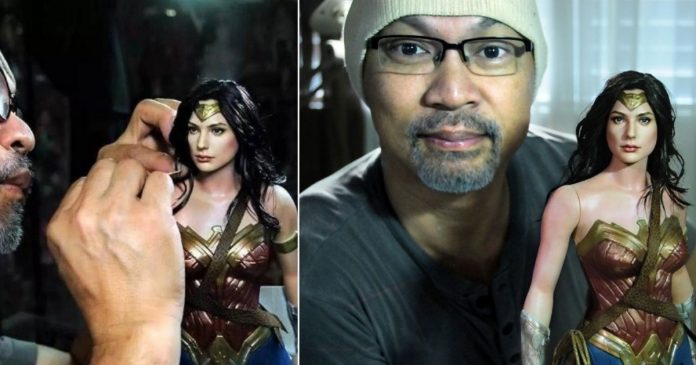 Everybody thought that only little girls play with dolls. It may be true. Though there are different types of dolls being sold in toy stores, including cute character dolls and animal figurines. These toys vary in price since some of them are made delicately for display only. Dolls played by little children are the more affordable ones. Some adults collect dolls from different nations, and these are the more expensive ones, depending on the country of origin.

Noel Cruz, a painter from the Philippines, can transform ordinary dolls worth US$2.10 (NT$60) into realistic figures. The finished products look realistic and are sold for a reasonable price. One of the more expensive celebrity portrait dolls even sold for US$15,000, or about NT$400,000.

Noel loved to draw since he was a child, and he also likes to collect various types of dolls. Since the delicate dolls are more expensive, he only had his pocket money to buy the less-pricey type of dolls. When he got older, he lost interest in the low-price dolls and finally came up with an idea: “Why don’t you transform these dolls yourself?”

He began painting ordinary dolls into celebrity look-alike figurines. He perfected his craft over 10 years. Unexpectedly, he himself transformed from an ordinary painter to an internet celebrity with millions of followers around the world.

As soon as his works were posted on the internet, they instantly went viral and were much appreciated by netizens. In a few years, he was able to garner more than 1.6 million followers on various online platforms. Behind his works, many people are also curious about him, why he likes dolls so much. Usually, only the girls are known for playing with or collecting dolls. Fans are surprised that a big man like Noel likes dolls since he was a child. They found it shocking.

As years have passed, not only was he and his dolls easy to locate through search engines, but also articles about him were published on various websites, and he also made appearances on local tv shows in the Philippines. Popular article websites like Buzzfeed, Boredpanda, and others, posted his beautiful works on their pages. All of them showcased his fabulous dolls and how attractive they were transformed.

Don’t be fooled. It is never easy to make such a masterpiece that looks perfect. Before he begins to paint, he studies the bone structures, body muscles, and shapes of each specific character. He then sketches these into a paper to conceptualize the finished product. He focuses on the facial structures and the character’s mannerisms to create the perfect character doll.

Noel would constantly compare the sketch image and the original doll and visualize how he would transform the product. Then, he would use chemical raw materials to wash off all the unnecessary paint on the doll’s face and other essential parts and use a special type of paint to transform the dolls. After a few days, the finished products are ready for viewing.

The original dolls with plain appearance, dull eyes, and faces with no expressions have all been transformed into life-like and exquisite character figurines. In the beginning, he only transformed ordinary dolls into well-known characters. Now that his skills have been developed, he moved on to transforming famous dolls, which became more lifelike when he repainted them.

The ordinary version of a Wonder Woman doll looks plain and stiff, her eyes and facial features lack expression. After Noel’s skillful painting, the doll transformed into a figurine that looked more “alive.” Not only did her facial features look three-dimensional, but the finished product looked real, as though the real mini Wonder woman is right before your eyes!

Lately, many netizens and celebrities came to him for custom-made dolls. He makes them choose what dolls to be painted, then he converts them into finished products to their satisfaction. The cheapest dolls were sold for about US$1,000.00, and the more expensive ones have a starting price of about US$15,000.00.

Noel Cruz has become a famous painter gone viral on the internet. More and more people come to him for customized dolls. It took him six or seven years to go from an unknown painter to an internet celebrity painter with millions of followers. To cultivate his superb painting skills, Noel devoted years of effort, a lot of time, love, and persistence and succeeded in the end. The achievement of Noel Cruz also shows that success is never easy. Work hard for it.

Farmer Finds “Ancient Copper Coins”, It Turns Out To Be Something...