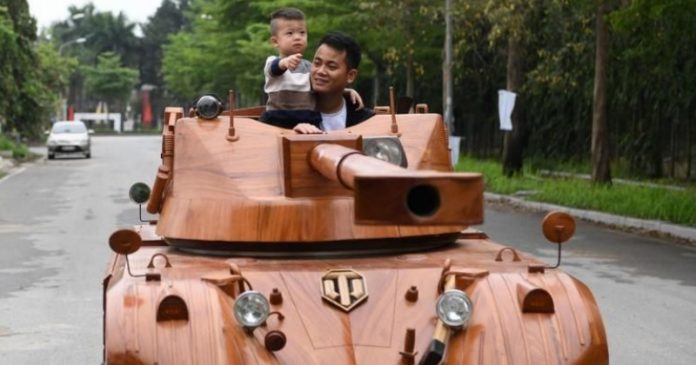 What are the chances that you would see a man and his toddler son riding a DIY wooden tank on a public road in the middle of the day? None, unless it was the father who actually made the homemade vehicle. Due to his passion for building wooden vehicles, Truong Van Dao created a wooden combat tank conceived from a game called World of Tanks (WoT).

Vietnamese father Truong Van Dao invested thousands financially and spent many hours building a wooden tank from an old minibus, for his toddler son. Now a peaceful country, Vietnam used to be ravaged by war with hundreds of real tanks ready for battle.

Converting a 16-seat minibus into a wooden tank, Truong Van Dao and his 3-year-old son ride around the neighborhood every weekend. The father and son duo live in Bắc Ninh province, east of the capital of Hanoi, Vietnam.

The wooden Panhard EBR 105 Tank boasts of a 2.8-meter-long replica gun and costs US$11,000.00 to build. It took Dao and two co-workers 3 months to convert the unused van into a wooden tank.

“My son and I find it more fun riding the tank, which has nothing to do with weapons nor war,” 31-year-old Dao told AFP. “I only considered it as a normal car, renovated it into a tank to make it more interesting.”

Maintaining the main engine and the flooring of the minibus, they assembled the tank by rearranging the inner parts to allow space for the gears.

It was a little more complicated for Truong Van Dao to guarantee all 8 wheels to move, though the wooden covering decorated with complex patterns was easier to deal with.

“The most difficult part was how to make the four subordinate wheels run,” Dao said.

The fastest speed of the finished wooden tank was 25km (16 miles) per hour. If Dao drives the wooden tank any faster than the maximum speed, the cable connecting the wheels will disconnect, and the vehicle will no longer move. As a result, the homemade wooden tank will not be breaking any speed records.

This homemade wooden prototype is in contrast with children’s toys since they play with a smaller plastic version in the streets of Hanoi.

“If all tanks in this world were the same as my tank, there would be no harm, just fun,” Dao said proudly.

Truong Van Dao has a YouTube channel called ND-Woodworking Art, wherein he showcases some of his other wooden works made especially for kids, and all fully functional. The Lamborghini Sian, Ferrari 250 GTO, and BMW 328 Hommage, just to name a few. Dao has half a million subscribers on his YT channel.

The father-son duo is often seen in the streets testing finished products. Although they are downscaled models, they are fully drivable and fully operational.

In his YouTube channel, the carpenter reveals that the vehicles are assembled from discarded trees, and to maintain a natural look, he only adds a glossy finish, and at times, he adds a little paint for a more credible outcome.

World’s Most Expensive Rolls-Royce Gets a Wooden Replica When A Dad...