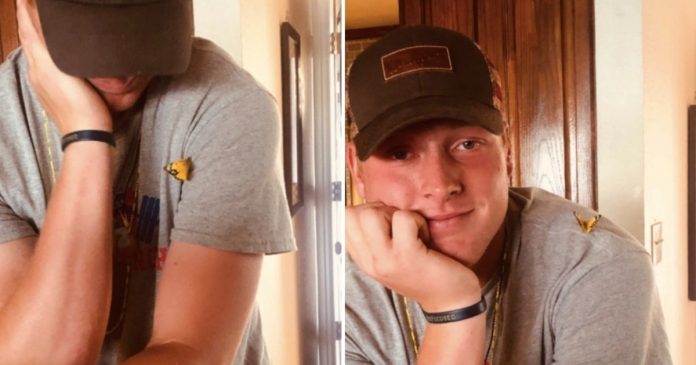 Life is a journey for every person. Along the way we lose someone we love, we get hurt, then we move on. Cole Shinsky, a left-handed college pitcher lost his mother 9 years ago. He reminisces his past years with her and keeps all good and warm memories in his heart. When an unexpected visitor appeared one fateful Mother’s Day at home, he suddenly realized that his mother kept her promise.

▼Cole is a superb college baseball pitcher and had a promising career in the sport when several problems arose. From a shoulder injury, he acquired from high-intensity training to potentially transferring schools, Cole was struggling with his problems and hoped that his mom was there for him. He needed guidance and support, but his mother has long since gone.

“She mentioned she’d be a yellow butterfly one day,” Shinsky wrote on Twitter.

“I was fishing off the dock at my aunt’s house, and she started walking down to me with her hands cupped together,” Shinsky told The Dodo. “She said, ‘Guess who came to visit?’”

▼Cole’s aunt had tears in her eyes, and when she opened her hands, a yellow butterfly was resting on her palm.

“The butterfly seemed perfectly content being held,” Shinsky said. “My aunt gently handed her to me.”

With the yellow butterfly on his palm, he slowly walked towards the house.

“When I finally stopped moving, she worked her way up my arm and sat on my left shoulder for a few minutes before I walked outside again,” Shinsky said.

▼Cole strongly believed that his mother has come to visit him on Mother’s Day! “This is incredible,” Shinsky wrote on Twitter. “For nine years, I have been mesmerized every time I see one, but I have never been close enough to touch one.”

“I think she specifically came to visit because I am currently in the middle of looking for a different school, and I’ve been having a rough time at college,” Shinsky continued. “She was just letting me know that she is still here.”

▼Cole went outside, and the yellow butterfly stayed a little longer then flew away. One day, Cole had two yellow butterflies tattooed on his left shoulder and said, “These are for my angels!”

Netizens who saw Cole’s Twitter post were moved by the incident. The mother-son encounter may be an unusual reunion, though it may be a reminder of loved ones that we have lost.

People from all walks of life still strongly believe that when a loved one leaves the world, they transform into our guardian angels.