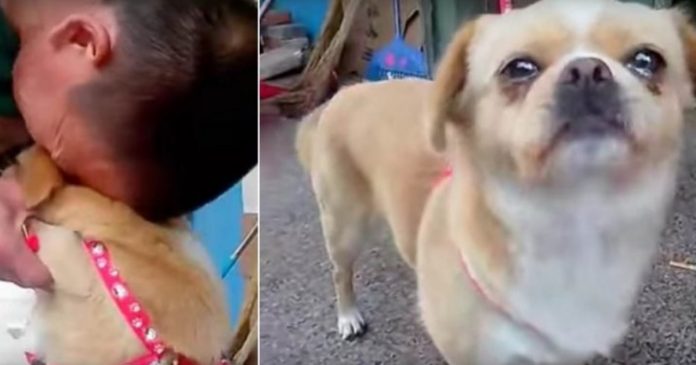 Bystanders were moved when they witnessed a little dog being given to a new owner. The dog trembled and cried while watching his master leave. This is the reason why people should not have dogs if they are not ready to tend to them. They are also like us. They need food and shelter.

This is a story of a dog owner who had no choice but to give his furbaby away since he was leaving and could not afford to bring the dog with him.

A man arrived in a shop, carrying his bag and a small terrier dog with him. The shop owner wondered about this after the man left. The next day, the man with the dog returned and told the shop owner that he seems like a good person to take care of his terrier dog.

Instinctively, the dog realized he was being given away to another owner. His eyes filled with tears, and his master was moved. He spoke with the shop owner about his situation. He said that his business failed. He is now homeless and has to leave to find another place to stay. He realized that he could no longer keep the dog. Hence, he asked the shop owner to take him in.

It was evident that the man loved his dog since he kept patting it. His reluctance to leave was clear. Bystanders who witnessed the emotional moment were moved.

The master left with tears in his eyes. He could not hold back his emotions he had to cover his mouth so the dog would not see.

When the terrier dog saw his master leave, he started whimpering, and tears rolled down his eyes while he trembled.

For one last goodbye, the owner came back, hugged his dog for the last time, and then he left, crying. Sad farewell.

It is not easy to own a dog. If an individual wants to have a pet to keep, be prepared emotionally and financially. They need food and a good place to stay, as well as love and care from the owners. #AdoptNotShop #PetLovers