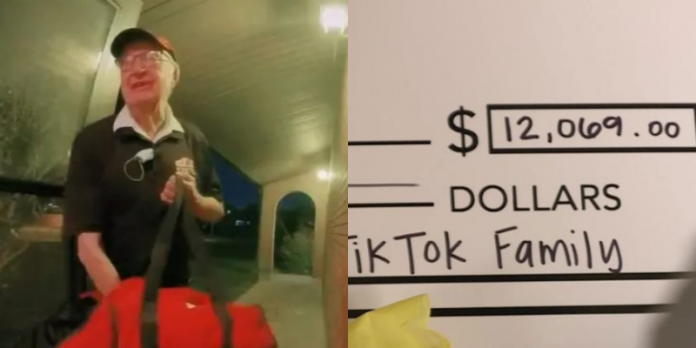 A second chance. A change of fate. These are the things everyone will hope for happening to them one day, in their effort to make life more bearable, especially in times of hardship.

For this 89-year-old pizza delivery driver, his fate changed when he received a $12,000 tip from one of his regulars, when he delivered them their Italian pie.

Derlin Newey, was in ‘shock’ when the Valdez family, a ‘TikTok family’ with over 53,000 followers used their platform, raised money and presented him with a signed cheque.

“It’s insane! Everybody loves him.”

Often greeting them with, “Hello, are you looking for some pizza?”, the family’s followers get asked several times why Newey was delivering pizzas at his age.

Caught off guard, Newey was speechless at the gift and confessed that he did not know what TikTok was.

According to Carlos Valdez, who initiated the donation run: “He needed this. I’m just glad we could help him.”

“We just need to treat people with kindness and respect the way he does.”

“He stole our hearts.”

They also presented Newey with a T-shirt that displayed his special greeting of, “Hello, are you looking for some pizza?”

When asked why a man at his age was still delivering pizzas, this was the answer they received.

“Newey’s social security payment was not enough to cover his bills.”

Netizens lamented on this piece of information and shared that Newey can’t be the only one to face this problem.

Americans at his age make a yearly income of $35,977, and can expect to receive $1,579/month in social security payments – which is barely enough to pay the average rent.

A Woman Reunites with Policeman who Helped Her During Her Troubled...