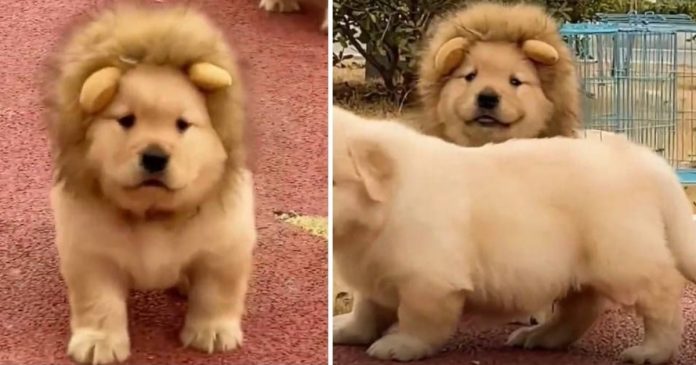 A Golden Retriever puppy with a lion headgear has captured the hearts of netizens around the world. Initially, you would think that you are looking at a lion cub, but look closer. There you go!

A dog owner had 2 Golden Retriever puppies. They are not only lively but lovely, as well. Earlier, the owner bought headgear for dogs in a pet store and placed it on the darker puppy. It fits! Once they were brought out to play in the park, passersby who realized it was a Golden Retriever with a headgear found it cute and called it “The Lion King!”

When the “lion” puppy noticed that its owner was capturing a video of their play in the park, it instantly looked at the camera and flashed a wide smile.

▲Little Golden Retriever: “You are photographing me. I really am the cutest lion!”

The puppy knows that the camera is kind to him.

Netizens left comments one after another on the owner’s social media page:

“The Shanzhai version of Simba! 😆”

“This little lion is so cute!”

“Hahaha! The puppy is so happy with the headgear.”

“It’s really good! We will make one next time.”

“I also want to raise a Golden Retriever, too!”

“Is it just a little lion?”