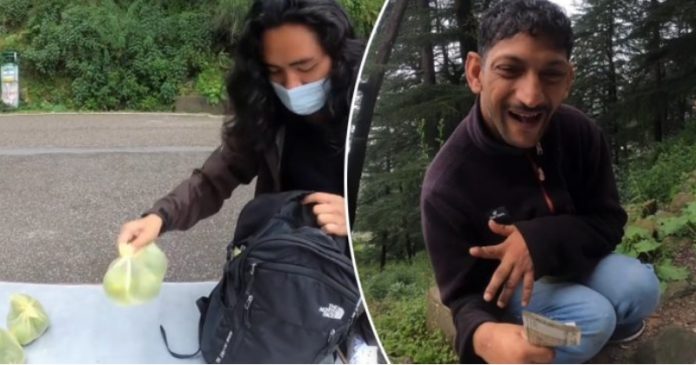 Lucky are the people who are born into rich families, having all the luxuries and experiencing life’s pleasures. Most of us, though, have to work hard to earn a living and ensure survival. Some individuals, though, work to support a family living in poverty.

It is not easy for a person who lives in poverty and suffers pain in silence, and has an existing illness. Every day is living in difficulty. However, these individuals are strong-willed and highly patient. Though not everyone can endure living this kind of life.

Video footage of a disabled young man selling bags of oranges on the side of the road has gone viral. Despite the difficulties of making a living, he remained patient doing a small business on the roadside to help his sick mother. An internet celebrity, Ted Kunchok, captured a video of a disabled man named Anu, while he was sitting on the roadside selling orange fruits.

Ted approached him and asked, “How’s the business going?” Anu replied, “There’s no business now.” The road seems to be empty as little to no cars have been seen passing through, and this situation made it difficult for Anu to find customers.

Since one bag of oranges is sold for US $1.35 (about ₹100 Indian rupees), Ted decided to help Anu by buying 1 bag. Anu felt very happy to have his very first customer for the day, and Ted is glad that he was able to help him.

When Ted learned about Anu’s sick mother at home, he became more sympathetic and decided to buy all 10 bags of oranges. Anu felt overjoyed and smiled as Ted started counting all the bags. When Ted asked Anu if he was happy, he replied, “Yes.”

One by one, Ted started loading the bags of oranges into his backpack. He removed one of them and gave the bag of oranges to Anu to be given to his mother. Anu reluctantly accepted. When Ted gave US $13.20 (₹1,000 Indian rupees) to Anu, he touched it on his forehead which was a gesture of being very, very grateful.

Ted asked about the condition of Anu’s parents at home and then handed some pieces of money bills to Anu to be given to his sick mother when he gets home. Before leaving, Ted helped Anu with the table, which was quite heavy, and set it down at a nearby hut.

He then offered Anu a ride home, which he respectfully declined.

A touch of nobleness can put a smile on someone’s heart. Ted’s heartwarming gesture to help Anu made both of them happy all day. Netizens who have seen the video were touched and have learned that it is not difficult to make someone happy and make them remember for a lifetime. If Ted can do it, so do we! Spread good vibes!

27-year-old Ted Kunchok is a ‘Youtuber’ from Tibet who is also a ‘travel vlogger’ and social media celebrity. His channel on YouTube is filled with adventure videos that are watched by millions of netizens. He is an ‘influencer’ who has made videos since April 2020 and has gained many followers on Facebook, Instagram, and YouTube.

Ted’s mission is to spread love and positive vibes around the world. He makes a lot of donations to various charities and makes contributions to poor people everywhere.