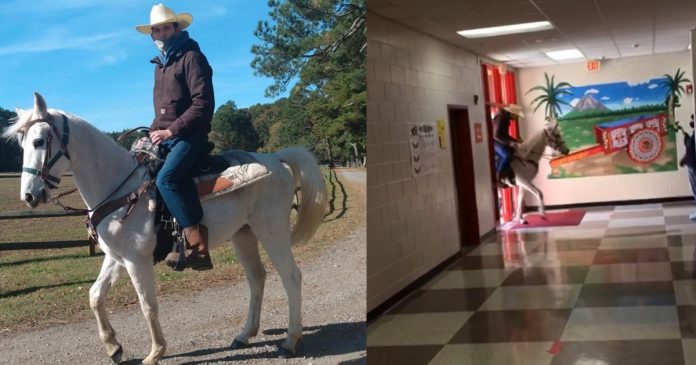 A male high school student literally rode a horse into his school building, causing mixed reactions between the students and the teachers, although some school authorities were not pleased with the prank.

18-year old Austin McGill, a senior high school student from Gloucester High School in Virginia, USA, was graduating from high school when he realized that something was still missing from his school life. One day, he came up with the craziest plan!

“I was talking to my friends and I was like ‘you know, I should ride my horse into school’ and they were just like ‘that would be hilarious.’” So, he did. “Nobody’s ridden a horse into this school. Everybody rides a horse to the school,” McGill said.

Gloucester is known for being a rural area. Most of the locals have livestock at home, and so does Austin’s family. On the morning of November 5, he rode his mother’s 27-year-old white horse named Sonny to school. Austin wanted to create the craziest memory of his high school days.

Austin revealed that he had waited a long time to pull off the stunt, but he could not find the right time when all the students were in school. He wanted all his friends to witness this unforgettable moment.

On the day of the prank, Austin rode two miles from his home to his school, keeping his distance from people along the way. Although he was ready for his stunt of “horse riding into the campus,” he was reluctant to enter immediately since he was unsure how the people would react with a horse in the vicinity.

“At first, he didn’t want to go in because down at the bottom, there’s a little metal thing. He had stepped on it, and it made a clanking noise,” he said.

Austin turned Sonny around, consoled him, then tried to enter the building the second time. Sonny went right in.

“That’s when everyone just surrounded all of us, and so, he was great about it,” said McGill. “First everybody started yelling and I was like ‘okay, calm down, it’s still a horse, you know. And once everybody quieted down a little bit, then I was trying to explain to them that it still is a horse, you know, they still have a mind of their own and basically just come near if you want to take that risk.”

Although Austin thought that his prank was just a harmless little joke, not everyone in his school was pleased with his stunt. Some of the authorities said that he violated campus rules. The decision of the administration had him suspended for 10 days, and when he returns, will be on good-behavior probation.

Initially, Austin felt baffled by the school’s decision to suspend him, although he noticed that there was a teacher who did not look pleased upon seeing the horse inside the school building.

“Nobody told me to go,” he said. “I was like, I don’t want to offend anybody, so I walked him out. I got off of him and walked him out, and that’s when I just rode right back to the farm.”

Since most of the students were at home for the past year and a half and did virtual learning during the pandemic lockdown, this was one way to put the excitement back into the students’ lives. “That was my main point to spread the joy because we’ve been cooped up,” he said.

“I wasn’t technically suspended for riding my horse into the building,” Austin said. “In the rule book, there’s nothing that doesn’t allow you to ride a horse into the building. I’ve thought about it, and really the only thing that they can say is ‘what ifs’, and I mean, there are a lot of things that could happen if you’re gonna say ‘what if’ and nothing happened. He was great. He did exactly what I wanted him to do.”

“Like I said, 25 years of training. It’s almost like… I wouldn’t say he’s perfect, but it’s 99.9%. I’ve been working with this horse since I wasn’t even a thing. So, I grew up with this horse, and we’ve done everything together. He’s my best friend. I couldn’t have asked for a better horse to do it with, so those ‘what ifs,’ it wouldn’t have happened, especially with him.”

Although it was not the worst prank a student has done, some schools are quite strict when bringing large live animals into campus. To avoid unexpected reprimands from school authorities, it is also not harmful to ask their permission.

A Couple Finds a Cute Black Puppy on the Side of...