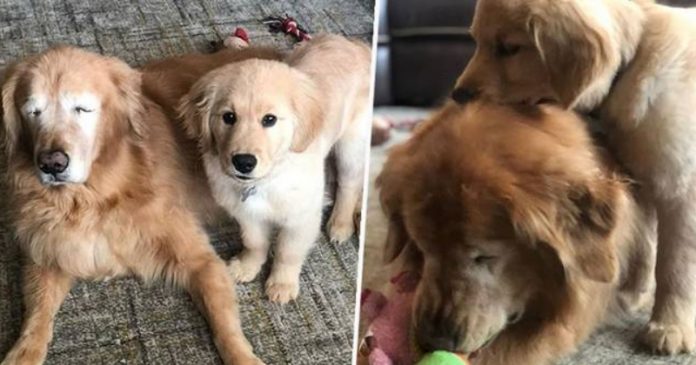 When a pet that was considered a part of the family passes away, their memories are never forgotten, and the love that the family has provided them never fades away. Even after their passing, a pet owner still shares photographs on their social media to honor their memories.

Chelsea and Adam Stipe, owners of Charlie and Maverick, still share photographs of the two Golden Retrievers on their Instagram page. Interactions between the two dogs warm the hearts of their 141,000 followers, especially when they learn the story behind their smiles.

Charlie, the blind Golden Retriever, passed away 3 years ago at the age of 11. He suffered from Glaucoma, a disease that is caused by insufficient drainage of fluid from the eyes. His eyes were surgically removed. Although Charlie has recovered quickly, he was never able to see again, though this never crushed his spirit.

On New Year’s Eve, the couple adopted 4-month-old Maverick, a Golden Retriever pup. “Maverick is here to help Charlie around, and Charlie is trying to teach Maverick manners,” the dogs’ owners wrote on their new Instagram page, “definitely a work in progress.”

Maverick is now Charlie’s “guide” dog. He helps carry Charlie’s toys, takes walks with him, and stays beside his older friend all the time. Although Charlie is unable to see, he still feels Maverick’s love for him and smells his scent wherever he goes.

The relationship between the two dogs gradually became better until they were inseparable. They stay together during meals and sleep time. Little Maverick affectionately licks his brother’s face, and Charlie returns the favor.

Seeing the two happy Golden Retriever dogs, the owners wished that they would always be happy and hoped that they will have long happy lives together.

However, happy days can just be a wish away. In 2019, Charlie’s health started to deteriorate until he could no longer eat any food. The owners were heartbroken and tried everything, including acupuncture and giving him therapeutic meals, but to no avail.

Maverick has felt that something was wrong with his older brother and started snuggling silently beside Charlie for comfort. After a few days, Charlie got better and started to eat again. Everyone was happy since he could play with his younger brother again.

Unfortunately, after a few days, in July 2019, Charlie passed away. The family felt that in the few days he was feeling better, Charlie was already saying goodbye to his family!

Now that Maverick is grown up, he is now considered the master in his home. Though Chelsea and Adam still share photographs of the two furry siblings on their social media in honor of Charlie’s memory.

“Many of you have asked about Maverick. He is doing good. Our ray of sunshine during this dark and difficult time. He’s such a good and loving boy. I think he knows things are different,” an Instagram post read.