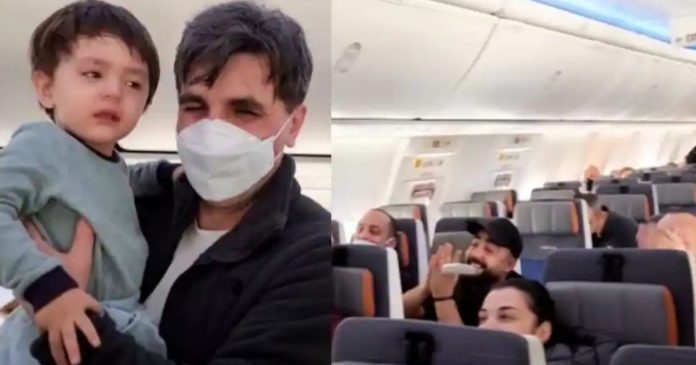 A footage went viral when a radio host captured a video of passengers in a plane singing the popular children’s song, Baby Shark, to a little boy who was crying onboard. People who have seen the video praised the kindness of the passengers as they patiently comforted the toddler.

Radio host Parikshit Balochi captured the heartwarming video on his mobile phone while traveling from Dubai, United Arab Emirates, to Albania. A little boy, which he assumed was roughly 4-years-old, started crying. No matter how his mother tried to comfort him, he would not stop.

Balochi noticed that the passenger behind the mother started singing Baby Shark softly to comfort the crying toddler. Balochi did the same. “I’ve got no shame because I do public speaking as a radio host. So I started singing out loud, and everybody joined in.”

The other passengers joined in, clapping and singing the popular children’s song. The 9-second video shows the passengers happily singing before the camera pans to the crying child.

“As it was happening, I thought, ‘Wow, this is a cool moment. I should take out my phone.’ So I started recording but only got a few seconds of it,” he said, though he admit that the passengers were already singing for about 20-seconds before he captured the happy moment.

Upon seeing the happy passengers and hearing them sing what everyone knew was a popular children’s song he has heard before, the child calmed down and was returned to his mother’s arms. In the video, the little boy was carried by a man Balochi assumed was his father.

The video was only 9-seconds short, though Balochi was able to upload the video on his Instagram account and on TikTok before he turned off his phone for the flight. When he arrived in Albania 5 hours later and turned on his phone, he received 120 notifications on his TikTok and an insane number of views. To this day, the video has garnered 7 million views.

Netizens have also left comments on the video post:

“We need a world full of these types of people.”

“Everyone is so cute! It seems they know the song.”

“There’s no doubt that crying babies are irritating on a flight,” Balochi told Insider, “You’ve got to have some tolerance. It’s only a child. It’s not the end of the world.”

Luckily, the passengers were patient enough to calm the toddler down through a song he may be familiar with. Though in some flights, some passengers tend to keep quiet when they hear a baby crying and leave the situation to the parents.

33-year-old Parikshit Balochi is a Bollywood radio station host in Dubai. He only has fewer than 5,000 followers on TikTok, and only garnered hundreds of views on his previous videos. Though his Baby Shark video garnered 7 million views. “I really did not expect it to blow up,” he concluded.

You’ll only see the most bizarre events in Japan and here...