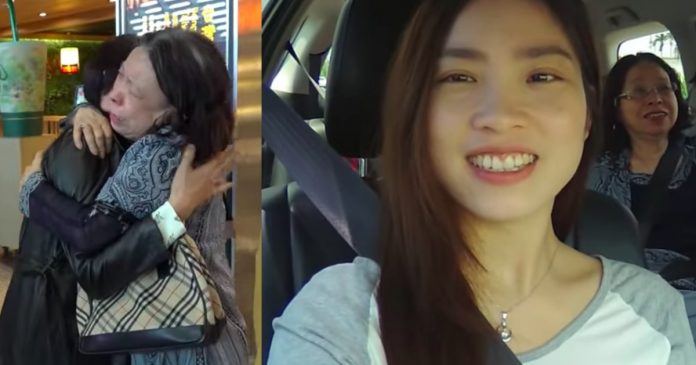 Most people find it difficult when a family member has to work in another place far from home, perhaps in another city or country. The different time zones from different countries make it worse. This is a story of a single mother from Vietnam who worked in Taiwan as a helper to support her 3 daughters.

One of her daughters, Ruan Qiuheng, paid tribute to her mother in a form of a video. It touched the hearts of almost 30,000 people who have watched the clip. Some of the netizens admit that the video almost made them cry.

Dongsen News reported that Ruan’s mother worked in Taiwan as a domestic helper for 14 years due to family economic matters. After a few years, Ruan and her sister traveled to Taiwan to study. It was a heartwarming reunion for the mother and her 2 daughters. Sadly, when their mother retired after a few years, the 2 daughters had to stay in Taiwan and their mother returned to Vietnam.

Ruan Qiuheng, the founder of the YouTube channel, Hang TV – Vietnam to Taiwan, shared a video about her mother, Leung Thi Hong Er, and her work in Taiwan. The description of the video says: “Mom has worked in Taiwan for 14 years and has returned to Vietnam. In exchange for this period of stay in Taiwan, we three sisters grew up safely and smoothly. Now I am married in Taiwan and I am staying in Taiwan as a new resident.” Upon her return to Vietnam, she expressed her gratitude to her mother in a form of a tribute video.

Noticing her grandma at the beginning of the video, she focused on her in the back seat and asked, “What is grandma thinking?”

Ruan Qiuheng recalls that her mother went to Taiwan to work as a domestic helper and supported her family back in Vietnam. Upon graduating from high school at Vietnam University, Ruan decided to go to Taiwan and continue her studies. “My mother’s employer is very good, so I have successfully completed my studies and by letting me live with my mother. My sister also came to Taiwan after she graduated from high school. The three of us, mother and 2 daughters, were in Taiwan and finally slept in the same bed again.”

When Ruan Qiuheng was currently studying in Taiwan, she gained so many experiences and was able to push through with her plan… to promote Vietnamese culture. Her unforgettable moment in Taiwan was when she met her current husband. The couple plan to return to Vietnam for their wedding. When Ruan learned that her mother’s contract in Taiwan was about to expire, she grabbed the opportunity to take her mother for a stroll around the city. It was also her mother’s first time going to the beach. “I will definitely take her out for a walk to relieve her stress,” Ruan said.

The video ended with the whole family at the airport to say goodbye to Ruan’s mother. Her grandmother could no longer hold back her tears and hugged her mother, making Ruan choke when she felt the emotions fill the moment. Ruan Qiuheng said, “Mother’s work in Taiwan is over, and we have to separate again.”

Ruan Qiuheng recalls that when her mother started work in Taiwan, her sister was starting kindergarten. Now that her mother is back in Vietnam, her sister has married and has started a family while pursuing her studies. Ruan Qiuheng said emotionally, “I lived being single in Taiwan for 14 years, and in exchange for me starting a family, both my younger sisters are studying for a master’s degree. My sister gave my mother a lovely grandson.”

“I hope my mother can be proud of our achievements that she has exchanged for her youth to work in Taiwan. Our family is happy and proud, and so do other people who witnessed everything.”