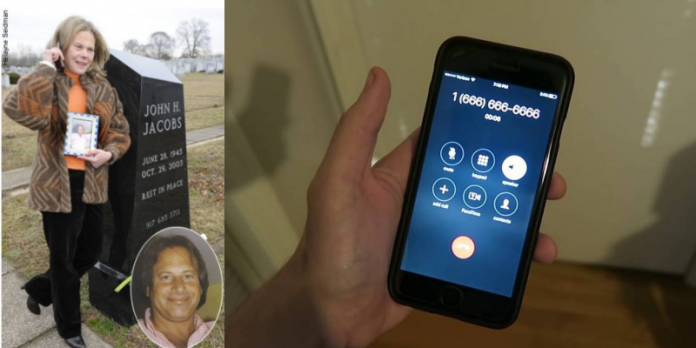 Marianne Seltzer, a Manhattan Defence Attorney has a weird habit to always get her husband’s voicemail – although he has been dead for three years because of pancreatic cancer.

John Jacobs, who is also a defence attorney was buried with his fully charged Motorola T720 phone, with a $55 Verizon bill getting paid monthly by his family.

Talk about the call from beyond!

Hilariously, nobody noticed that the phone was left with John until their son Simon, phoned in and startled mourners in attendance that a phone was ringing in the coffin.

Marianne shared: “The poor grave diggers. I thought they’d have a heart attack.”

According to Marianne, John would always call those closest to him three to four times a day.

Recalling the experience, Marianned would phone in on her husband just to hear his outgoing message :“Hi. You’ve reached the voicemail of John Jacobs. After you hear the beep, leave a voicemail and I will return your call.”

For the past 3 years, Marianne left thousands of messages to her husband. She would then share her monthly message, which would sound something like” “Hopefully the Knicks will do better this year. Hopefully, they’ll finally have a winning season. Sammy passed all his finals. It’s cold outside today. I hope it’s not cold down there.”

“Some people talk to God. I talk to my deceased husband.”

His sons would also join in with messages like: “Dad, the Giants won the Super Bowl!”

“I wish we could have gone. You always wanted to go.”

Marianne added that she had no plans of terminating the service, citing that as long as people care: “I don’t think I’ll ever shut it off.”