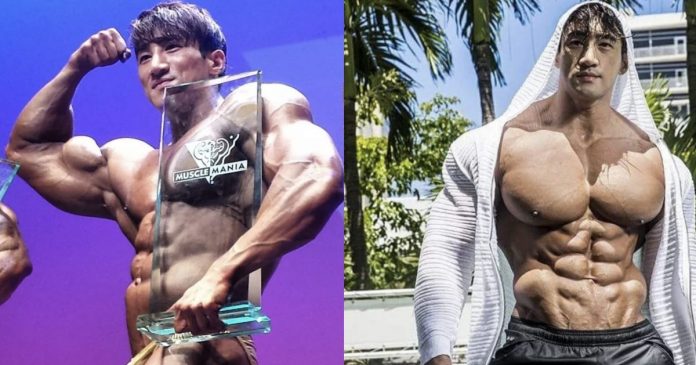 At 18-years-old he was scrawny and sneered at by people. This led him to improve his body by training at the gym for hours daily. Now 35 years old, his hard training transformed him into one of the big muscled men in Asia. He participates in competitions and dances to the beat of Korean music. He’s amazing!

There are so many muscular fitness enthusiasts in Europe and the United States, may they be men or women. Although there are also men and women in Asian countries who spend time in the gym, rarely do we see contestants in muscular fitness competitions that hail from Asia.

Recently, a 38-year-old South Korean bodybuilder named Hwang Chul Soon graced the social media and streaming sites with his amazing physique and unique style of dancing during competitions. He has been given the nickname “Asian Arnold” (Schwarzenegger). He is 1.78m (5’8″) tall and weighs about 90kgs (198lbs). He’s got the looks, everyone admits, but has very huge muscles, making him the strongest in Asia man.

Hwang Chul Soon has been participating in bodybuilding competitions since 2009. He has already won several championships. He also has proved many prejudiced foreigners wrong when they were against the Asian bodybuilding industry, justifying to show the world that Asians too can win in such competitions.

Hwang Chul Soon was ridiculed when he was 18-years-old and weighed only 57kgs (126lbs). He started exercising and frequented the gym at age 20, and at age 37, has achieved his ideal physique. Look at him now!

Hwang Chul Soon said: “I used to help others or talk to strangers, but others looked down on me.”

When he started exercising, he had to do more than 1,000 sit-ups every day to develop his abdominal muscles. At first, the result was not very good, and it fell below his expectations although he worked hard on his own.

Hwang Chul Soon decided to go to the gym for training. He was provided the proper diet for bodybuilding, mainly consuming high-protein food and eating bananas to relieve muscle soreness.

Within 5 years, his weight increased to 82kgs (181lbs), then further increased to 102kgs (225lbs). He used multiple methods in improving his body mass and unevenness. Hwang Chul Soon wanted his muscles more proportioned and for him to look beautiful in competitions.

Hwang Chul Soon is not only popular in the South Korean bodybuilding industry but also in the entertainment industry. He has been making appearances in reality shows, gracing magazine covers, and making money on his own. He has worked hard to achieve his physique since he was younger, and now it finally paid off!

Meet the Highly Popular Twins from the Royal Family of Monaco;...