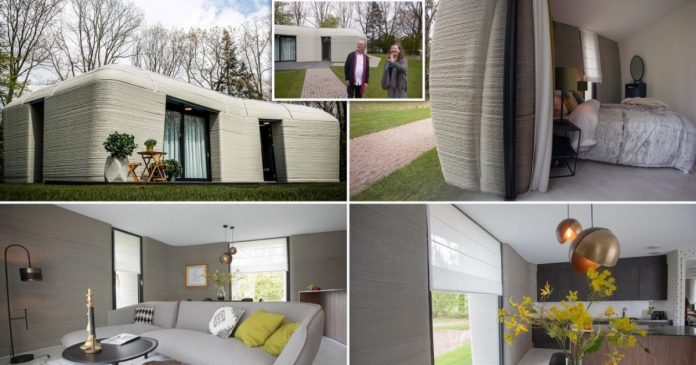 Technology is indeed getting to be more advanced, inclusive of the construction industry. People are accustomed to building their houses brick by brick, though nowadays, technology has become so advanced that even a house could be built using the 3D-printing technology. News of a retired Dutch couple moved into their new home which only took 5 days to build and their new house looks amazing!

A retired Dutch couple moved into their new home in May 2021, and the news has captured the attention of people around the world. According to the LadBible, the peculiar house is built with 3D printing high-tech, and it only took 5 days to build. The house looks like a huge boulder with windows and was printed at a nearby factory. Even the interior decorations are fascinating!

70-year-old Elize Lutz and 67-year-old Harrie Dekkers, who lives in the 94-square meter house, rented the two-bedroom bungalow through a real estate developer for US$960 (£695) per month after they retired. After only 5 days of construction using 3D-printing technology, the Dutch couple moved into the house located in Eindhoven, southern Netherlands.

Retired shopkeeper Elize said: “It’s a form that’s unusual, and when I saw it for the first time, it reminds me of something you knew when you were young. The house is beautiful!”

On the day they moved in, Elize and Harrie were given a digital key. It can be used to open the front door by just pressing a button. Such advanced technology has surpassed the old tradition of building concrete houses.

Harrie said: “It has the feel of a bunker – it feels safe. When I first entered the house, I found that the furnishings inside were even more unbelievable!”

When you enter the new 3D-printed house, you will notice that most of the furniture is grey, white, and black colored, and the walls are made of concrete and have a “striped” appearance. The interior was well-planned and very spacious. The unique appearance is like a mini private villa.

According to Eindhoven University of Technology professor Theo Salet, using 3D-printing technology to build houses can reduce using too many materials by 30%, and houses can only be built in days.

Prof Salet said: “Why? The answer is sustainability. And the first way to do that is by cutting down the amount of concrete that we use. It also means that waste would be reduced.”

Using 3D-printing technology to build houses can also reduce time consumption and manpower. The Dutch government hopes that the buildings can be used on a grander scale to solve Netherlands’ housing shortage. The country’s growing population needs to be placed in houses in the next 10 years, hoping that the 3D-printing technology is the solution to the shortage.

Elize and Harrie claimed that the 3D-printed house is sturdy, the concrete walls are strong, the heat just as perfect, and the sound insulation is very good. The retired Dutch couple is enjoying the peace of their new home.

Bas Huysmans, chief executive of construction firm Weber Benelux, said: “This is also the first one which is 100 percent permitted by the local authorities and which is habited by people who actually pay for living in this house. If you look at what time we actually needed to print this house, it was only 120 hours. So all the elements, if we would have printed them in one go, it would have taken us less than five days because the big benefit is that the printer does not need to eat, does not need to sleep, it doesn’t need to rest. So if we would start tomorrow and learn how to do it, we can print the next house five days from now.”

▼Let’s watch the video below and take a closer look at how the house was built using 3D-printing technology:

Dessert chef creates unique and mind-blowing desserts that taste nothing like...