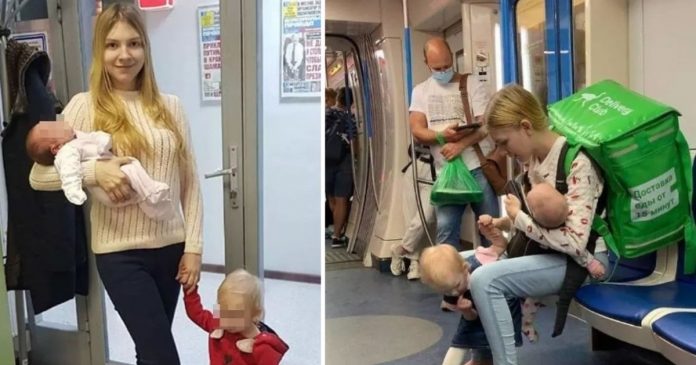 When you greet your mother on her birthday or tell her that you greatly appreciate her love and care for you all those years, have you ever asked yourself, “How did my mother be so ‘GREAT’?”

On the internet, surveys on various websites have garnered many reactions to the question, “What do you think is the hardest thing about being a mother?”

Some of the comments are, “The greatest thing my mother ever did was…” and “This was one of the most difficult things my mother has ever done.”

Photos of a young mother who works for a courier service company and takes her children with her while she is working have gone viral on the internet.

The woman in the photo is a young mother of two, carrying a large green express bag on her back, holding the hand of a child a few years old, and another infant in her arms. Netizens were amazed by the viral photo.

The photo has come to the attention of the local media. They have revealed the real situation behind the photo, and netizens were amazed by this young mother.

The young mother is 19-year-old Lada Koroleva, who works as a delivery woman for a courier service company called Delivery Club.

She currently lives in a remote apartment in Moscow with her husband. Regardless of having a wife and 2 children to support, her husband is not motivated to improve and plays video games at home.

Due to economic reasons, she is a full hands-on mother and did not hire a nanny at all. She takes her children with her when she works which makes the young mother admirable and respectable.

At 17-years-old, Lada had her firstborn child. After a few months, she began to work and brings her baby in a stroller while she delivers food to various places.

However, her financial hardships increased when she had her 2nd baby, and she continued to work for the courier service company, as shown in the photos below.

However, the courier services company job is quite unstable. Lada hopes to find a more stable job in the future, wherein she may also spend more time at home with her children.

Currently, these photos have been posted multiple times on various social media platforms. People have high praises for the unfortunate yet strong young mother. Many are hoping that her situation may improve and she get better for the sake of her husband, children, and herself as well. Such a capable and beautiful girl…

A Mother, a great woman

In the photo above, a mother is feeding noodles to her disabled son. A mother’s genuine love will not see this as a sacrifice. She is raising her son the best way she could with all her heart.

The mother in the photo above is a painting based on real-life events. For her child to be saved, she sacrificed her own life. When the child grows up and sees the photo, he will realize how much his mother loved him.

A mother would keep her child safe and put them first, no matter how hard life would be. In the photo above, no matter how heavy her pieces of baggage were, she still carried her baby and kept him safe.

She will support her child in every aspect and would not want to miss every moment while her child grows up.

During the cold weather or the rainy season, when a mother is outdoors with her child, she would keep her warm as much as possible. A selfless mother puts her child first before her. In times of danger, she puts herself first and protects her child.

They say the best things in life are free, though the sweetest thing in life is a mother’s love. Don’t you agree?

This Boss Awards His Employees With a Big Salary, Lends Supercars...