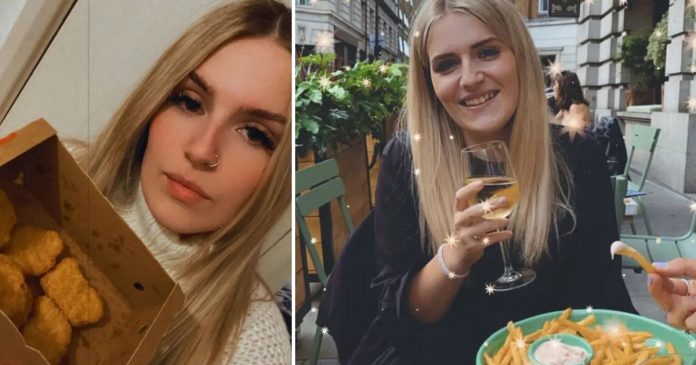 We all need to eat a balanced diet 3X a day to be healthy. This includes meat, vegetables, fish, and fruits. Although there are people who are vegan or pescatarian, a healthy diet can keep our bodies strong and perhaps, live longer.

25-year-old Summer Monro from Cambridge, UK, suffers from avoidant restrictive food intake disorder (ARFID). According to Monro, she feels sick after she eats food other than chicken nuggets, chips, and fries. For the past 22 years, these are the only food she eats.

▼Summer was not a picky eater when she was still a child. Though when she was 3 years old, she was forced to eat mashed potatoes. Growing up, she gags whenever she sees them, and this has caused her fear of eating fruits and vegetables. Since then, she only eats chicken nuggets, chips, and fries.

“I can’t remember the last time I ate a fruit or vegetable,” Monro told South West News Service. “I’d say it was when I was about 3. I tried to eat some apple, but I physically can’t. It’s not that I don’t want to try. It just makes me feel sick, and there’s a part of my brain that physically won’t let me do it.”

▼Summer has undergone two psychotherapy and hypnotherapy to treat ARFID but to no avail. She still could not get rid of her fear of fruits and vegetables. Monro’s phobia is so severe that she even turned down her grandfather’s offer of US$1,310.00 (£1,000) to eat a single pea.

“I just can’t see myself changing,” the Brit said. “I like the smell of food, but if I try to eat it, it makes me physically sick. As soon as it touches my lips, I can’t do it. My family wanted me to eat more. My grandfather asked me to eat a pea, but I couldn’t eat it. I wasn’t interested in eating. When everyone was eating sandwiches at lunch. I took out a bag of potatoes and ate it.”

▼Summer never eats breakfast. During lunch, she only eats a bag of potato chips and chicken nuggets for dinner. She claims that despite the eating disorder, she is physically healthy.

“A lot of people are surprised that I never get sick, skipping fruit and vegetables has no effect on my body,” Monro said. “I had blood tests, and everything was fine. When I went to the doctor, they also said I’m fine because I get the protein from the chicken, and I’m not overweight or underweight. I’m also a very upbeat, happy person, and people don’t understand how I’ve got so much energy. It doesn’t affect me physically. I don’t feel lethargic or anything, and I’ve had blood tests, but they’re all fine.”

“It’s definitely something to do with the texture. The things I do eat are crispy, which is the opposite of mashed potato,” Monro theorized.

▼Summer’s peculiar eating disorder had a certain impact at first on her relationship with her current boyfriend, Dean McKnight.

“My partner takes it really well,” Monro said. “When we first met, I didn’t tell him about ARFID, and we were walking around town looking for a restaurant, and I ended up having to tell him because I kept saying no. His parents did a lot when they visited. Delicious food. I can’t eat one bite.”

“I’m really bored, I don’t get excited to eat,” she admitted. “It affects me mentally, especially when I go to restaurants and I sit with nothing. We went out for my sister’s birthday, and I sat and didn’t eat and it made me feel like crap.”

Credits to: Kennedy News and Media

This is the Kamitetep, a Species of Moth (Phereoca Uterella ) that Clings to the Walls of the House

4 quick and effective tips to get rid of head lice...