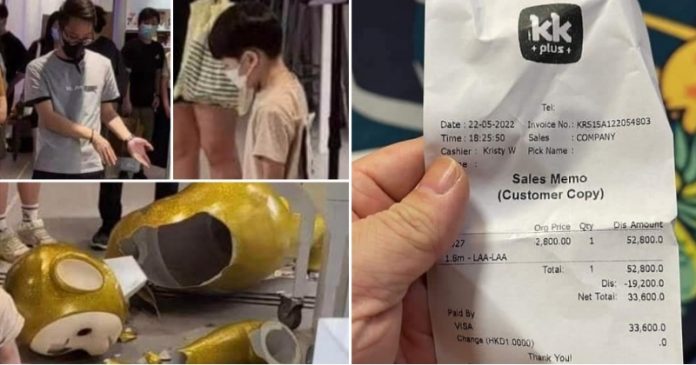 Teletubbies was one of the popular children’s shows. It ran from 1997 to 2001 on television screens around the world. Although the show is no longer airing, the popular program still plays reruns on television in some other countries, and Teletubbies merchandise is still being sold in toy stores.

A happy day at a toy store in Langham Place shopping mall in Hong Kong turned into a nightmare when a father paid for a giant 5’9″ statue of Laa-Laa the Teletubby that his son accidentally leaned on and smashed into pieces when it fell. The incident occurred on Sunday, May 22. The staff of the store became furious as the statue broke into pieces.

Luckily, the store had CCTV, and upon checking the footage, the little boy appeared to be leaning on the statue but failed to prevent it from falling, so it crashed.

The boy’s father was on a call when he suddenly heard a loud crash and ran back into the store to see his son staring at the damaged statue. Assuming that his son was at fault, Cheng agreed to pay for the giant statue.

The father said: “My son was motionless. He was just staring down at the statue. My son was so terrified after the incident that he had to skip school. He asked me why the sculpture looked scary.”

However, worry turned to annoyance when the staff initially accused the child of kicking the statue though surveillance footage showed otherwise. Cheng felt irritated when his son was wrongfully accused. The footage revealed that the child accidentally knocked over the statue when he leaned toward it.

Disgruntled, Mr. Chen criticized the staff of the toy shop for misleading him and his wife. He claimed that the toy store staff should have been more responsible by protecting the statue and labeling it “fragile” for everyone to see.

Mr. Chen requested a refund, though the shop owners of KK Plus claimed that they and the father had ‘mutually agreed’ about the compensation.

According to Hong Kong Free Press, the shop owners said in a statement: “The incident was dealt with immediately and completely resolved, and the payment was proposed by the owner. This large-scale decoration is actually a prototype of the first printing. The official pre-sale price is US$6,725.00. The cost of the prototype involves various expenses, including copyright and design, research and development and mold making, reinforcement, packaging, transportation, and more. The decoration is only for viewing and has no toughness to withstand pressure. We did not charge the family more than the cost price of the goods. The decoration has been displayed at its current location since November last year, and it did not cause any inconvenience to the customers.”

The incident caused mixed reactions leading to a widespread debate on various social media platforms. Netizens were wondering who was ultimately responsible for the damages and eventually diverted the discussion to the store’s way of ripping off a father whose son was falsely accused.

Other netizens questioned the store’s responsibility of putting a cordon around the sculpture to prevent customers, especially children, from standing too close to the statue.

On the other hand, parents should also keep their children close whenever they are in public places and keep an eye on them for safety.

Netizens who originally accused the boy of damaging store property diverted their anger to the store. Many have questioned why the 5’9″ statue of Laa-Laa the Teletubby was not secured behind a cordon.

The next day, Kidsland International, the parent company of KK Plus, released another statement that the store has apologized to the family and refunded their payment of US$4,250.00 in full, according to The Standard.

The footage revealed the real incident, and the store that wrongfully accused the child of kicking the statue received widespread backlash on social media, with various netizens stating that the statue was not sturdy and could easily be toppled over.

The store has given a full refund to the family and “will take action to further improve the store’s safety and prevent a similar incident from happening again.”

The manager of the store claims that they have taken better precautions and have eliminated all displayed toys over 1m. tall. Hong Kong Free Press reported that the store owners will be conducting a further investigation of the recent incident.