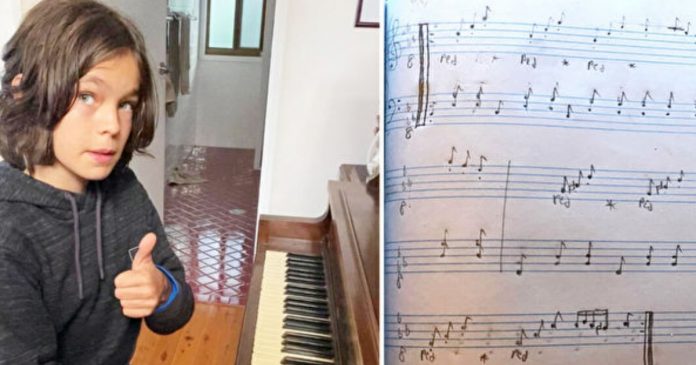 His beautiful music serenaded the whole world even after his passing. A young boy suddenly died and left a half-completed musical score that musicians helped accomplish. Now, even well-known orchestras play his music to honor his memory.

A mother from Australia found a music book in a bag next to her piano. Days have passed since her 12-year-old son suddenly died. When she opened the book, she found an unfinished score written by his son. Amanda Brierley, wanted to help finish her son’s work, so she went online to seek help. Surprisingly, many musicians and orchestra members responded and contributed to complete the unfinished score.

“On the way back, he had been sitting in the car reading an e-book. When he got home, he got out of the car and opened the gate,” Amanda told The Epoch Times. “Kyan swung the gate open and he became wedged between it and the car trailer.”

Amanda’s husband and some of the neighbors did CPR on Kyan, hoping to revive him, but to no avail. He was then rushed to the hospital. An hour later, the doctor announced the sad news that Kyan has passed.

“It wasn’t a car accident. It didn’t involve speeding. He just opened a gate,” Amanda said. “I couldn’t stop crying. I was hysterical.”

A few days later, Amanda found Kyan’s unfinished music score. The family knew that Kyan had a talent for music, and he always wanted to try his hand at composing, but they were unaware that he has already started.

The first thing that Amanda did was, she shared the music sheet online in hopes that someone could play the unfinished symphony for her. “I’ve never heard of it,” she explained, “I made a Facebook post, only to my friends, and about 15 minutes later, one of my friends sent me a version of the performance. It’s unbelievable to hear Kane’s music.”

Amanda wanted to hear various versions of Kyan’s unfinished score, so she asked people from around the world for help. She changed the audience of her post from “friends only” to “public”.

She received various performance versions and was amazed by the overwhelming response to her post. Well-known musicians and acclaimed orchestras sent their renditions of Kyan’s music.

▶Here is a video shared by award-winning violinist Patrick Roberts on his version of Kyan’s composition: (Watch on the website, click on the link below the photo.)

▶Enjoy the version of the Queensland Symphony Orchestra as they perform Kyan’s unfinished symphony:

Every music version Amanda has received gave the family a chance to hear what Kyan’s full composition would sound like. Amanda hopes to receive more versions, and she also made a YouTube channel to share every version submitted by everyone for family, friends, and the whole world to enjoy and honor Kyan’s memory.

Proud Amanda described Kyan as “incredibly passionate” and full of humor. “Kyan loved Lego, Greek history, and mythology, and was interested in the human mind.”

Kyan has been diagnosed with ADHD and autism, but he is focused. Amanda says, “If he’s interested in something, he’s going to be focused on it. When he’s playing on the piano, it was evident. He was able to sit there and play from morning till night.”

▶Watch Kyan’s great-grandmother in her version of his unfinished score: (Click on the link below the photo)

Kyan started playing the piano 7 months before he passed away. He was inquisitive and just started hitting the piano keys. After 2 days, he learned to play Beethoven’s piano piece “Für Elise” on his iPad. He also taught himself to play after watching videos on YouTube.

“Listening to Kyan’s work played by every stranger makes me feel the exact opposite or the contrast,” Amanda said. “I think that’s probably what it’s ultimately about. We’ve lost Kyan forever, but we’ll always have his music.”

This is what the most expensive wedding cake in the world...