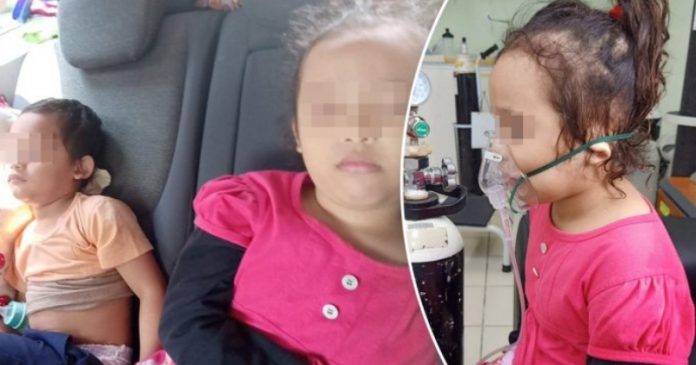 Carbon monoxide poisoning from leaking car air conditioner is deadly. Many people have called this the ‘silent killer.’ Incidents of this type of poisoning have occurred around the world. Sadly, it can never be detected. Its only sudden occurrence is when you discover that the lives of people in the automobile are in danger.

Although people are aware of the possibility of this occurrence while driving an automobile, it can easily be ‘missed’ due to its rare incidence. The stronger probability is when the car is parked while the air conditioner is on. People are advised to open the windows at least an inch or two, or better yet, turn off the engine and open the windows.

On May 19, another case of monoxide gas poisoning occurred in Malaysia. Luckily, everyone survived. The incident was posted by Nur Jalilah Leyla on her Facebook page. She recalled the most unforgettable experience she has encountered with her mother-in-law and children while she was driving her car along a highway to Tanjung Karang, Selangor in Malaysia.

At first, Jalilah said the children and their grandmother were happy and chatting while on their way to her mother-in-law’s home. There was nothing suspicious about the car, and it was running perfectly.

At a stop-over, Jalilah took a photo of her sleeping children and sent it to her husband. He noticed that his son was pale, so he asked Jalilah if the children were all comfortable. She assumed they were tired from the trip, so they fell asleep along the way. However, she felt that something was wrong, and she suddenly felt nervous.

“At about 1:00 PM, after passing the Vincent Avenue rest stop, Diza, one of my children, suddenly lost his temper but did not open his eyes, and when I was about to coax him, I found him weak,” Jalilah recalled.

Jalilah suddenly felt limp with panic, and she realized something was wrong. One by one, she tried to wake up her children, but none of them showed any response, transforming her worry into a panic. She also noticed that their breathing was getting weaker.

Still no response from her children, Jalilah cried out for help. Fortunately, a Chinese family who passed by stopped to rescue them.

The driver named Mr. Richard noticed something wrong with the car’s air conditioner and suspected a carbon monoxide leak from the exhaust pipe, so he told them they had to open the windows.

Mr. Richard instructed Jalilah to follow his car to the hospital, leaving the windows of her car open. On the way, the mother-in-law tried to wake up Yiza and Zara. They slowly awoke but felt very weak, and they kept on crying. Yiza looked pale and tired.

Jalilah said that Yiza began to vomit, feel dizziness, and had difficulty breathing. When they finally arrived at the Gou Mark Aboriginal Hospital, they were immediately assisted, and the children were given oxygen. However, the mother-in-law fainted.

When Jalilah and her family were treated and stabilized, their bodies still felt weak, so they needed to be transferred to Selayang Hospital for monitoring.

The doctors later confirmed that the family was poisoned due to carbon monoxide inhaling. She mentioned that her mother-in-law was feeling dizzy and weak during the travel, so maybe the poison gas leaked at that time. This was a happy family trip that turned into a nightmare.

In her Facebook post, Jalilah reminded everyone driving that before traveling, check on the car’s condition, whether it is used or brand new, to ensure safety. When traveling with children, supervise them when they are about to sleep. Tell the elder child to look after the younger ones. She also advises drivers to stop every 2 hours to rest or open the windows for a moment.

Jalilah also expressed gratitude towards Mr. Richard’s assistance. She panicked up to the point where her mind was already blank and did not know what to do. Mr. Richard did not hesitate to help and led them to the hospital. Although they did not have a thorough conversation, she heard him mention that he was on his way to Shayanaan, so she assumed that his family might be staying in Shayanaan.

The post was shared by over 14,000 netizens, and some left grateful comments praising Mr. Richard for his willingness to assist.