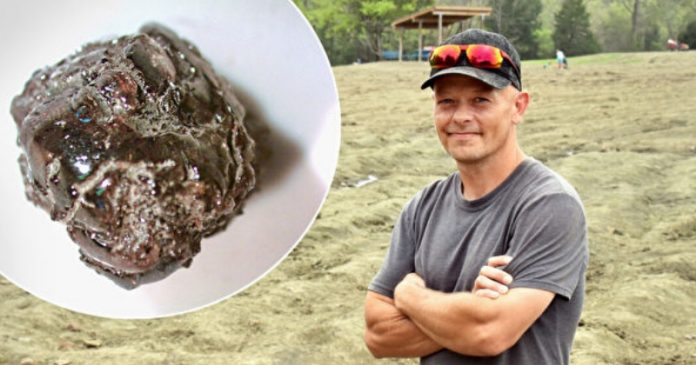 Earlier this year, a man who has been treasure hunting in the United States for almost a decade discovered a 2.38-carat diamond in a state park in Murfreesboro, Arkansas. It was the largest diamond found in the park this year.

10 years ago, Visitor Adam Hardin first visited Crater of Diamonds State Park and has found hundreds of tiny diamond stones. Over the years, he has become friends with many of the park’s other regular visitors. Together, they compared the diamonds that they collected during their visits.

One day, one of his friends found a 1.79-carat diamond, and they all agreed that whoever found a bigger diamond would be called ‘king of the mountain.’ This motivated Hardin to persevere more on diamond hunting.

“One of the other guys and I have been going back and forth, seeing who can find the biggest diamond,” Hardin said. “I found a big one, then he got a 1.79-carat, and we were joking about who would find the next big diamond and be ‘king of the mountain.’ As soon as I found this one, I had a feeling I had him beat. Now he’s trying to find a bigger one, but I’m planning on staying on top!”

On April 10, sure enough, Hardin finally discovered a brown diamond weighing 2.38 carats. A rough diamond the size of a pinto bean, is the largest diamond stone found in the park this year.

“It was right in the middle when I flipped my screen over,” Hardin said. “When I saw it, I said, ‘Wow, that’s a big diamond!’”

Confirmed by the park’s Diamond Discovery Center, the diamond Hardin unearthed is round, coffee-brown, and roughly the size of a pinto bean. The metallic luster diamond which had a slight surface crack, weighed 2.38 carats.

According to the park’s “finders keepers” policy, anybody who discovers a diamond gets to keep the treasure, no matter the size. Hardin got to name the diamond he found and decided to call it ‘Frankenstone’, based on the classic character ‘Frankenstein’, due to its appearance.

“I thought of the name because it has a pretty and kind of not-so-pretty look to it,” Hardin explained. “Us diamond miners call that ‘character!’”

Hardin’s ‘Frankenstein’ diamond was, so far, the largest that was unearthed since September last year. Before that, a couple from Granite Bay, California, discovered a 4.38-carat yellow diamond at the park.

Crater of Diamonds State Park in Murfreesboro, Arkansas, is the only diamond-bearing park in the world that is open to the public. It has been said that since 1906, more than 75,000 diamonds have been discovered in the park. This year alone, a total of 260 diamonds have been discovered, with a total weight of more than 44 carats. Visitors can dig one or two diamonds almost every day.