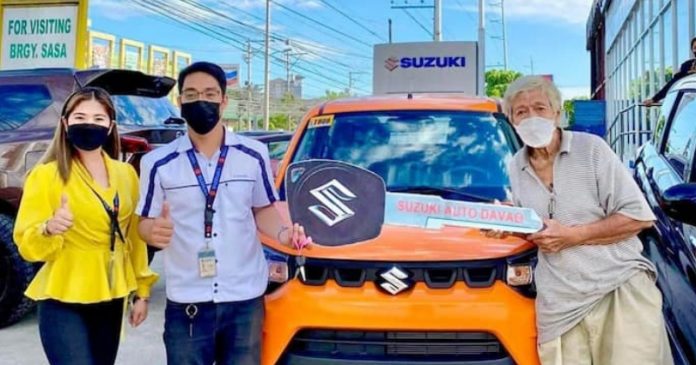 Even when people kept reminding each other of the saying, “Do not judge a book by its cover”, there are still others who do. More often than not, incidences wherein people are looked down upon happen more in high-profile establishments. Sadly, if your outlook is not to their satisfaction, they tend to shun these individuals even if they are financially-abled persons.

Recently, a retired associate professor from a prominent university in the Philippines was denied entry to one of the car showrooms due to his old clothing and dirty face mask. Luckily, there was another leading brand car showroom nearby. This time, he was greeted by happy sales agents and was entertained promptly.

Suzuki auto sales executive, Love Alejandria-Dorego, shared on Facebook that an elderly man entered their showroom in Lanang, Davao City, and shared how he was shunned by another showroom personnel before he could even step inside their establishment due to his ragged clothing.

“Tatay Manuel went to another Showroom before ours, however, he said he wasn’t allowed to get in, maybe because of his outward appearance, wearing very old and stained clothes, dilapidated and holed shoes, and a dirty mask.” sales executive, Love Dorego said. “He walked into our Showroom at Lanang, but we didn’t hesitate to let him in and entertained him, asking what unit he wants to inquire about. He said he wants to buy a unit.”

Dorego and another salesperson welcomed Mr. Manuel Almere inside the Suzuki showroom. “After presenting our displayed cars, he decided to buy the S-presso. He said he’ll pay it in cash,” Dorego said. “But, he will go back the next day because he didn’t bring his money with him being afraid to bring the cash while riding a bus and a jeepney.”

The next day, Mr. Almere came back, and one of the Sales Executive named Michael accompanied him home to get the payment for the new car. Mr. Almere paid PH₱593,000 (approximately RM49,225) in full for the Suzuki S-presso car.

Dorego quotes: “Tatay doesn’t have a family. He said a woman just took advantage of him and took his money away. He is a retired Teacher. Here in SUZUKI AUTO DAVAO-LANANG, we never underestimate anyone.”

In an interview, Mr. Almere revealed that he originally wanted to buy a motorcycle to get to a church far from his home. Considering his advanced age, he decided to buy a car.

Mr. Almere admits that he does not care about the latest trend in clothing. He wears anything that makes him comfortable and does not aim to please anyone with his appearance. “I want to please God. Not myself, not a woman, not the world.” Mr. Manuel Almere said.

Heartwarming Music Composed by Chopin was Played by a Ukrainian Pianist...