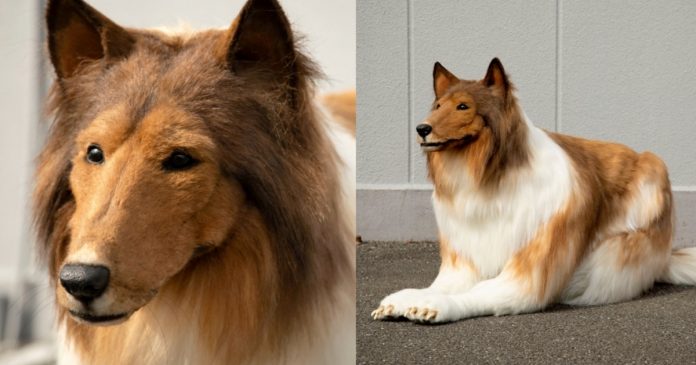 There are millions of dog-lovers around the world, though hearing news about a man who wanted to become a dog is rare. A man in Japan loved the Collie dog breed so much and decided he wanted to become one. He spent thousands of dollars for a Collie costume that looked realistic.

According to an interview with Mynavi, Toko is an animal-lover and has always wanted to try and become an animal one day.

When Toko finally received his Collie costume, he immediately resorted to Twitter and said: “I ordered a costume! Thanks to you, I was able to fulfill my dream of becoming an animal!”

Toko had his costume customized by a Japanese company called Zeppet, a company that revolutionizes special modeling and makeup practices of high-profile modeling studios, movies, commercials, and corporations.

The company accepts individual orders from the public, though special orders are only 10% of their many services. Together with the team at Zeppet, Toko did many alterations to the design of the costume. They also underwent costume fitting, and it was finally completed after 40 days. Toko paid US$15,564.00 (approx. S$21,600) for the finished product.

Here are some photos of Toko’s finished Collie costume:

On Twitter, Zeppet revealed that they followed Toko’s instructions on how to make a dog costume and modeled it after a Collie dog. The costume was meticulously done, and it allows the person who wears it stands on all four legs, as a dog would.

According to Mynavi, a spokesperson for Zeppet revealed that the team devoted their time studying the body structure of a Collie dog and how Toko could adapt while wearing the suit.

Toko admitted that movements while wearing the costume was very limited, though he can move like an actual dog while wearing it. He has to be conscious of his dog movements so they would look natural.

Toko and the team from Zeppet collected photos of a Collie from various angles to make the coating and the fur on the costume look more real.

In April 2022, Toko signed up for a YouTube channel to showcase his dog costume and share videos of him in a dog costume and doing tricks. As of today, there are 9 videos of him in his Collie costume shared on his channel. In one video, it shows him doing dog tricks in his costume like sitting and spinning. In another video, he was playing with a stuffed toy, an item that most dogs love.

A netizen commented on his video: “So nobody’s gonna talk about him spending over US$15K to get this costume?”

While another netizen who was happy for him commented: “He’s living out his dream!”

If you are expecting to see how Toko looks outside the costume, you may be in for a disappointment. He only posts videos of him wearing the costume. “So, how does he get into the suit?” A curious netizen commented:

If you want to see YouTube videos of Toko in his Collie costume, head on to his channel here.

Toko, in his Collie costume has been seen on a Japanese talk show wherein he interacted with the host as a dog doing tricks.

A Vietnamese Mother Worked as a Helper in Taiwan for 14...