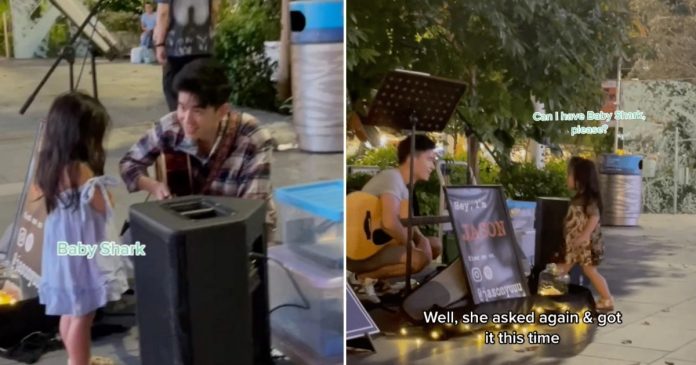 People love to watch videos online of children dancing to their favorite music. Although lately, the song ‘Baby Shark’ has been a hit with many children ages 2 to 5. Even toddlers aged 1 seem to be enjoying the song on a loop. On the contrary, parents are haunted by the song if played on repeat.

Baby Shark has upbeat music and catchy lyrics that captivate the attention of little kids, especially a 3-year-old girl from Singapore named Evee, aka Baby Eve. Recently, Evee’s mom shared a video of her on TikTok requesting a song from a street performer on Orchard Road. Little Evee asked the busker to play ‘Baby Shark’.

The street performer, Jason Yu, respectfully declined her request. Unfortunately, he did not know the chords of the song.

A few weeks later, Jason saw little Evee together with her mom visiting Orchard Road once again. At the time, Jason was ready to grant her request, and Evee jumped for joy while dancing to her favorite song, ‘Baby Shark’. On Monday, the 9th of May, little Evee’s mum shared a video on TikTok showing the little girl enjoying the music as Jason played for her.

Jason was busking outside Wisma Atria the first time little Evee approached him for her request. He was stunned since he was not familiar with the children’s song. He even asked little Evee’s mother to confirm if there really was such a song.

When Evee’s mom confirmed that he heard correctly, Jason smiled at little Evee and admitted that he did not know how to play the song. When the clip was shared on TikTok, it instantly went viral, garnering 181.2k likes, 361 comments, and 1179 shares.

Many netizens were touched by how Evee calmly approached Jason and requested her favorite song despite her young age. Some admired Jason for patiently listening to her request though he respectfully declined in the end. A netizen assured that he would have given in to her request if only he was familiar with the children’s song.

One of the netizens who commented jokingly tagged Jason, encouraging him to learn the song immediately. Jason replied to the comment with his own video. After hearing the request of little Evee, he immediately researched the chords for ‘Baby Shark’. He surprisingly found it “quite easy”.

By the time he was ready to sing little Evee’s request, the mother and daughter duo did not visit Wisma Atria for quite some time. He felt that the day he declined her request was a “wasted opportunity”.

Thus, Jason posted a shoutout to Little Evee and her mother saying that if ever they visited Orchard Road again, he was ready to grant Evee’s request. It seemed that the duo was able to respond to the shoutout since another TikTok video that was posted on Monday, the 16th of May, showed little Evee requesting for ‘Baby Shark’ once more as she approached Jason.

This time, Jason finally granted her request. The video showed Evee jumping around and dancing with joy as Jason played and sang ‘Baby Shark’. Little Evee was very happy and excited that she could not sit still throughout the song, and when she did, she was still moving to the upbeat of the song. A wide smile etched across her face.

It was heartwarming to watch little Evee while she enjoyed the song, and the scene even became more touching when she gave Jason a hug when the song ended.

A casual request made by a toddler who loves ‘Baby Shark’ was just the beginning. Thanks to TikTok, Jason was able to reach out to the duo and grant Little Evee’s request, which eventually brought out the happiest day to a little girl while she danced to her favorite children’s song.

Authorities Gifted Single Mom A Van, After Finding Out About Her...