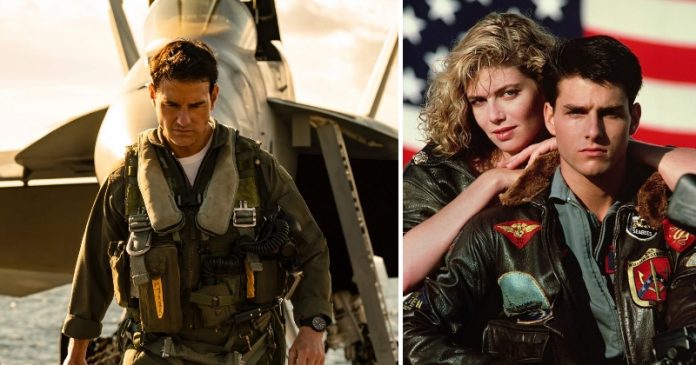 Unfortunately, Kelly McGillis did not make a come back for the second installment of the movie Top Gun. Tom Cruise did not make any comments on why Ms. McGillis did not appear in the second movie. Their on-screen chemistry was evident, though. He was a fighter pilot training in Miramar named Pete “Maverick” Mitchell, while she was the most beautiful Top Gun instructor named Charlotte “Charlie” Blackwood.

Tom and Kelly’s partnership on the movie “Top Gun” in 1986 was highly patronized by fans from around the world. Moviegoers flocked to the cinema, and most of them watched the film more than twice. Some of the women could not get over Tom’s good looks. Nowadays, fans are in awe of why Tom Cruise’s youthful appearance has not faded over the years. On the other hand, Kelly McGillis has aged gracefully and has retired from the limelight.

In 1986, the year when Top Gun was released in the theaters, Kelly McGillis was 29 years old, and Tom Cruise was only 24 years old. They were a good-looking pair onscreen, hence, the popularity of Top Gun went global.

Kelly McGillis was born in California but moved to New York after graduating from high school in 1975. She entered Juilliard School of the Performing Arts to study acting and moved on to audition for movie roles. She first appeared in the 1985 movie “Witness” but earned a name for herself and got her big break when she landed the role of fighter pilot instructor Charlotte “Charlie” Blackwood in Top Gun. At the time, Ms. McGillis had blond wavy hair and a model stature.

Since then, Ms. McGillis has been appearing in small movie roles and TV series and gradually faded from the industry. Recently, she emerged to do an interview and revealed why she did not return for the second installment of Top Gun. She admitted that she wanted to focus more on family life and has retired from show business.

“My priority is to accompany my daughters grow up, and I hope that I can be a competent and sober parent,” Kelly revealed in the interview. Now 64-years-old, she is happily retired, and she will always be remembered and supported by family, friends, and loyal fans from around the world.

On the other hand, Tom Cruise has been frequenting the big screen and has been appearing in numerous big hit movies such as the “Mission Impossible” saga, “Jack Reacher,” “Interview with the Vampire,” “The Outsiders,” among others. According to Wikipedia, his latest movie, “Top Gun: Maverick,” broke several box office records upon its release, including the largest Memorial Day four-day opening weekend, and has grossed $783.1 million worldwide, making it the second-highest-grossing film of 2022.

Citizens around the world are very much astonished that Tom Cruise’s looks have not faded even after 36 years. Some of them claim that he may be “frozen in time.” People who have seen the movie “Top Gun: Maverick” said that he did not look like he aged a day since the first Top Gun movie, unlike his female partner, Kelly McGillis, who has aged elegantly and retired from showbusiness.

In addition to having regular facials with dermatologists, Tom Cruise reveals some of his secrets to age-defying appearance.

On one evening of the Oscars ceremony, Tom Cruise revealed that one of his secrets to staying young is wearing a Placenta Facial Mask daily. It is an anti-aging and rejuvenating treatment that promotes the growth of collagen and reduces the appearance of fine lines and wrinkles. Tom says that it is very helpful to restore skin elasticity and moisture. It feels great!

2. Take small meals and avoid too many carbohydrates

In addition to physical maintenance, a good diet maintains a youthful appearance and keeps the body healthy. Tom admits to eating “small” meals at least 15 times daily to help maintain energy, especially at work. Tom reveals that he avoids eating carbohydrates. He bluntly said that too many carbohydrates can easily lead to increased body fat, inflammation of some internal body organs, accelerate skin-damaging, and aging.

3. Make it a habit to exercise often

Tom Cruise has always been asked in almost every interview what his secret to staying young is. He replies: “Sea kayaking, spelunking, fencing, treadmills, retraining, rock climbing, hiking, jogging… I do a lot of different things.” Tom does not deny that through a combination of aerobic exercise and weight training, regular exercise habits had helped maintain his youthful looks, and the feeling of strength that is half his real age makes him still do dangerous stunts in some of his scenes without the help of a body double. At the age of 60, his physical strength is amazing!

Here is the latest photo of Tom Cruise and Kelly McGillis together after so many years. Tom’s youthful appearance is so awesome! People have been wondering why he never ages at all!

11-year-old aspiring musician stuns the public in Taiwan with his amazing...