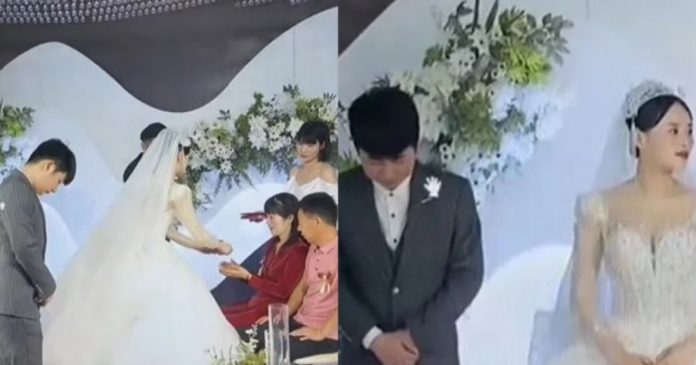 Couples are expected to be prepared when their wedding day arrives. Most couples take months of preparation before their special day comes. Recently, a couple in China wed on May 30. Throughout the ceremony, the groom kept his head down, arising speculations from the guests that there may be a problem between the couple.

On May 30, a couple got married in Haozhou City, Anhui Province, China. During the ceremony, the groom kept his head down, showing no expression of either happiness or sadness. Guests at the event were speculating that the groom was forced to marry his bride. During an interview, the bride made light of the situation. “I don’t think he’s here to get married. He’s here to attend my wedding.”

According to Oriental Daily, the ‘Bride’, whose name was Ms. Song, introduced her ‘Groom’ with his surname, Xu. They were classmates in college but did not immediately fall for each other then. After they graduated, they were both employed by the same company. They often communicated after work, and later, they started dating. After a year and a half, they got engaged and decided to marry.

The couple had a grand wedding. From the venue to the layout of the event, it was evident that the couple had made proper preparations. On the day of the event, guests were surprised why the groom, Mr. Xu, kept his head down from the beginning of the ceremony until it ended. He made no facial expression. He seemed drowsy, and his eyes were kept closed.

Additionally, the groom did not actively participate during the wedding vows and was unsatisfactory while saying his vows to the bride. On the other hand, the bride actively participated and cooperated while saying her vows until the wedding ceremony has ended. The guests at the event were wondering why the groom was quiet and unhappy, especially on a very special occasion. Some of them speculated that the couple had an altercation before the wedding.

However, the bride did not take the gossip seriously. During the interview, she revealed that the groom has been quite impatient and waiting for the wedding to end. “He is hungry because we had to wake up early for the preparations before the ceremony. He has not eaten since this morning.” The bride said, smiling. “I think he’s not here for the wedding. He’s here for my wedding. He didn’t want to get married. He just came to eat.”

Still, at the wedding interview, the groom noticed that the bride was questioning his participation in the wedding ceremony. Finally feeling annoyed by his wife’s responses, he said angrily: “I hate red tape on the day of the wedding. People are hungry but they still stick to what needs to be done. Our stomachs are already growling, and they won’t let us eat. Is it unnecessary to eat during a wedding ceremony? How can I still perform well when I feel hungry?”

Upon hearing her husband’s angry words, the bride felt sad and felt a little pity for him. When the event finally ended, she uploaded the wedding photos on her social media accounts. The post garnered various reactions from netizens, and it immediately went viral.

Here are some of the comments from netizens:

“Is it because other people eat before my wedding? So why can’t I?”

“Once in a lifetime event. I feel sorry for the bride.”

“How did this wedding event end?”

“He’s just there for dinner but got married anyway.”

After all the preparations for such a grand event, do not forget to prepare yourself, too. A wedding may come only once in a lifetime.