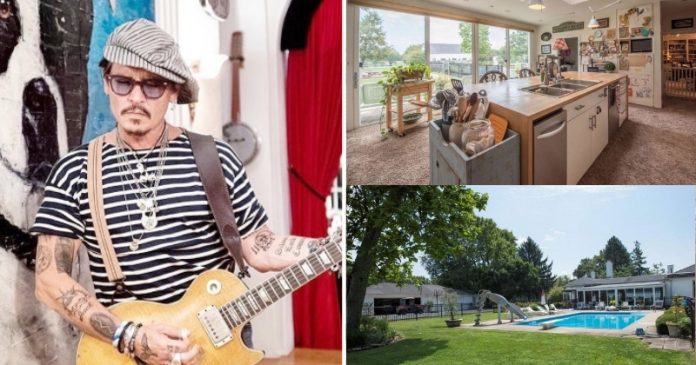 The luxurious farmhouse boasts six bedrooms, two barns, and a pool. Hollywood superstar Johnny Depp originally purchased the horse farmhouse for his beloved mother Betty Sue Palmer, who lived in the residence until she passed away in 2016. As of today, the property is up for sale at $1,350,000.

In 1984, Johnny Depp made his film debut. He has been appearing in numerous films and TV series since then. He is a recipient of multiple awards, including a Golden Globe Award and a Screen Actors Guild Award, and was nominated for 3 Academy Awards and 2 BAFTAs. Additionally, in 2003, and again in 2009, Johnny was named “World’s Sexiest Man” by People Magazine. By then, Johnny Depp has garnered millions of fans across the globe.

Superstar Johnny Depp was famous for his skills in purchasing homes in the past. At the peak of his career, he purchased homes in other countries such as Italy, France, and the Bahamas. He has also purchased homes in the USA, particularly in Los Angeles and Kentucky. The total price of all his properties, including the LA Penthouses, is approximately $90 Million! In 2017, Johnny decided to sell his Kentucky Horse Farm for a slash-down price of $1,350,000 from the original price of $2.33 million.

Netizens are curious about who will be able to purchase the celebrity’s mansion, though most of them are curious about its interior design. In March 2020, DailyMail UK published photos of the celebrity’s home in Kentucky. The stylish interior design has amazed netizens. Additionally, the website has mentioned that the $1.3 million ranch is for sale. Take a look at the following photos:

Standing in front of the American country-style home, you will notice various flowers and plants lining the front lawn and decorated at the front door. Johnny’s mother, Betty Sue Palmer, lived on the property from 2005 until her passing in 2016. The entrance alone promises a sense of warmth and tranquility.

The property is huge that it has been called a manor by other citizens. The terrace at the side of the house is covered with transparent glass, so sunlight can enter. The glass house is also decorated with potted plants. It is one of the best places on the ranch to read books or drink afternoon tea. The ambiance is very relaxing and calm. Suitable for parents and individuals who like to savor a tranquil area.

The farmhouse has many relatively large living rooms. One of them tends to be quite warm, with a fireplace to keep decreasing the cold temperature during winter. Most of the furniture in these living rooms has warm colors. Visitors can automatically feel relaxed when they stay for a good chat.

Another huge living room has floor-to-ceiling windows and a carpeted floor, and the furniture is more modern. The bright living room is very spacious. If you plan to have an indoor party, it would be suitable in this living room.

The gourmet kitchen at the opposite end of the house has a view of a large island and the backyard. The floor-to-ceiling windows and the lighting of the kitchen makes the perfect mood while cooking, and the complete culinary and baking utensils are neatly stacked and available for use. After cooking, you may open the doors to enjoy the breeze from the courtyard, and it would be great to have open-air dining.

Apart from the glass house, you may also stay in the study room for quiet reading. The comfortable earth-colored sofa and carpet give the area a relaxing mood to immerse yourself in a good book.

Inside a huge bathroom are walls made of ivory-white tiles. A sense of luxury can be felt upon entering. A large bathtub and a massage room are available for use. It is the perfect place for an individual who likes thorough hygiene.

It is also evident that Johnny Depp’s family loves horses. When most homeowners have dogs and cats for pets, his family keeps a stable of horses! There is a vast fenced land where the horses are free to run. Guests who love horses will surely love to visit them, touch them, or even ride the horses.

Of course, a celebrity villa is not complete without a swimming pool. It has a water slide and a diving board, so you can have much fun under the sun. Although during the summer, avoid staying in the pool or under the sun for too long. Wear sunscreen to avoid sunburns. It is advisable to stay indoors when the sun is scorching hot!

The Kentucky Horse Farm boasts of two barns, 15 stalls, four automatic waterers, paddocks, a separate guesthouse, a gourmet kitchen, and a manager’s quarter. Other amenities of the property include a sunroom, a pool, and a large 4-car garage.

The elegant farmhouse is homely and has an old-fashioned ambiance with small and cozy bedrooms perfect for resting and relaxation.

Actor Chow Yun Fat once told his wife he will not...