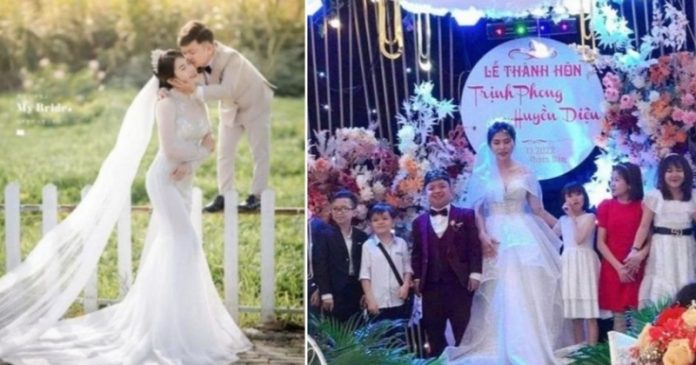 A 137cm. (4’5”) tall man married a 162cm. (5’3”) tall woman. He had to stand on the railings to kiss his wife for a photoshoot and climb a ladder to cut the wedding cake. The ‘unusual’ couple saw past their height difference and found true love with one another. A peculiar love story that is better than a fairy tale.

Photos of a Vietnamese couple who married instantly went viral on the internet when they showed the bride and groom with a height difference that was far apart, causing mixed emotions on social media. The Wolipop Lifestyle website published photos of the newlyweds. The groom, Trinh Van Phong is 137cm. (4’5”) tall, while his wife, Li Thie Dieu, is 162cm. (5’3”) tall. During the wedding reception, Trinh had to stand on a ladder beside his wife for the cake-cutting ceremony.

The couple’s wedding photos are very romantic. One of the photos that caught the eyes of the public shows Trinh standing on a fence to kiss his wife on the cheek. ❤️

Trinh admitted that he stopped growing when he was in the first grade and that he was often bullied since then. He still stood his ground and did not let any bullying incident bog him down.

After a few years, he met his wife, who worked near his home. They frequently talked and got to know more about each other. They fell in love, and after 3 years of dating, the couple decided to marry. Trinh admitted that both their families did not approve of their marriage due to the height difference, though they managed to convince them in the end.

“We had a hard time convincing our family to allow us to marry. I don’t know how my wife was able to do it. After two weeks, the family agreed,” Trinh said.

Although the couple often heard negative comments about their height difference, they are too much in love and disregarded any unnecessary remarks from netizens and outsiders.

True love is hard to find. When it comes to you, cherish and keep it forever.

Putting Salt at the Entrance of Your Home is Surprisingly Useful. Here’s Why.

Emotional Reunion for a 65-year-old Woman and Her 84-year-old Biological Mother Who She Finds on TV Show, Long Lost Family

A Baseball Pitcher Gets a Surprise Visit from a Yellow Butterfly...