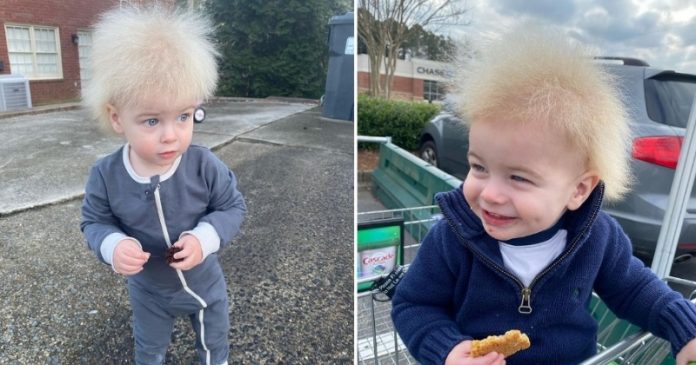 There have only been 100 cases worldwide, though his parents assume that there may be more. This rare hair condition happens to kids between 3 months and 12 years old and is known to be uncombable. His condition is referred to as the Spun Glass Hair syndrome. The toddler with his fluffy and cute white hair instantly became viral on the internet.

A toddler in Georgia, USA, named Locklan Samples has had fluffy white and silver hair since he was born. Although he was born healthy and a bubbly baby, his parents were unaware that he had a rare genetic hair condition, a disease that only happens to a few children.

Locklan has been suffering from a rare condition called “Uncombable Hair Syndrome” since he was born. The condition usually happens to children between 3 months and 12 years old and is known for uncontrollable hair growth. It is characterized by silvery-blond or straw-colored hair that is disorderly, stands out from the scalp, and cannot be combed flat.

Children with Uncombable Hair Syndrome (UHS) have blond to white-colored hair. The roots of their hair are triangular in shape, which results in frizzy straight hair. There have only been 100 cases globally, and Locklan is one of them. Everyone feels excited when they see him shake his hair. Awwww! ❤️

Locklan’s parents were unaware of his condition and recently discovered it by accident. A stranger messaged them on Instagram, asking if they were aware of his condition. They never heard of it. Hence, they consulted a pediatrician who referred them to a dermatologist. There, they learned of Locklan’s diagnosis.

Finally aware of his rare condition, Locklan’s parents are still very proud of him. They have assured everyone that Locklan is in good health. His frizzy white hair makes him stand out from the crowd. He has become a local celebrity, and everyone stops to have a photo with him. He is pretty much a normal child, and the only thing different is the attention he receives from citizens.

Although Locklan is still unaware of his condition, his parents will surely educate him and his brother about UHS. They also want to spread awareness around the world that such a rare genetic hair condition is safe and the children are all in good health. They should never feel inferior about themselves, instead be proud to be “different”.

Locklan has an Instagram account managed by his parents. To date, he has accumulated 43.9K followers. Check out his page, where you will find updated photos of Locklan: daily photos, travel photos, close-up smiles, or playing at home, all of which will warm even the coldest of hearts.

Locklan’s condition makes him different from other children, though he is healthy and people know him as someone very special! ❤️

Know these 8 wondrous plants with special abilities—some knows how to...

A Filipino Domestic Helper in Singapore Tells Her Story on Working...