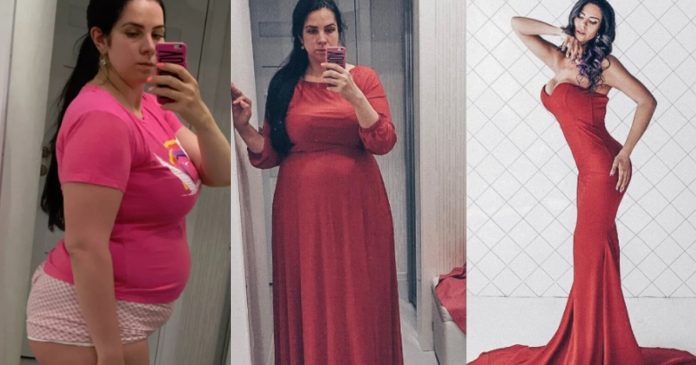 People always say, “It is easier to gain weight than to lose a little.” Yes, it has always been a struggle for people to lose excess weight. The bait to indulge in one’s favorite food would always be there. One woman was very determined to lose weight to execute the perfect revenge on her cheating husband.

34-year-old Evgeniya Vorobyeva from Russia, a mother of 2 children, successfully lost 60kgs. in a year and a half. Not only did she succeed in losing weight, but also in getting rid of her cheating husband. She has become a fitness blogger on Instagram and is now known for being an inspiration to women.

Evgeniya has always longed for a happy married life. She met her (now) ex-husband through a mutual friend. After years of being in a relationship, they finally decided to marry. After the marriage, Evgeniya got pregnant. Due to complications in her pregnancy, she suffered a miscarriage. The doctors said that the chances of having another baby would be low. Evgeniya fell into depression and started stress-eating, which resulted in excessive weight gain.

After a few months, a miracle happened to the couple. Evgeniya got pregnant the 2nd time. Though 6 months after her baby boy was born, she got pregnant again and gave birth to a 2nd child. Her weight has soared to 125kg.! Her friends even cracked a joke: “Are you sure the baby is already born?” Evgeniya felt embarrassed to look at herself in the mirror. She did not like to see her wrinkly skin that looked like an orange peel.

With comforting words from her husband, Evgeniya gradually recovered. Though after some time, she noticed that her husband gave inconsistent reasons when he went home, and his attitude became very cold. Unintentionally, Evgeniya saw the unfamiliar text messages on her husband’s phone. Sure enough, he has cheated on her. “I tried to reason with him but got a straight accusation: ‘I cheated because you were too fat.’” The husband’s inconsistent reasons were similar to other men who cheat, and sure enough, it was because she was not beautiful enough.

Evgeniya realized that the only person she could rely on was herself. Before loving others, she must love herself first. Taking her husband’s cheating to heart, Evgeniya did not file for divorce just yet but started a revenge battle. First, she moved out with her children, then she moved on to changing her appearance: losing 65 kilograms.

Evgeniya did not choose to lose weight through dieting but chose to lose weight through exercise and fitness. She once revealed in an interview that after losing the first 10 kilograms, she felt a lot lighter when she walked, and climbing stairs was not as heavy as before. She began to walk more frequently, enjoying it a little bit more and began to enjoy the feeling of losing weight.

For the next few months, Evgeniya traveled to and from the gym and home daily. She controlled her diet, successfully reducing from 125kgs. to 65kgs., and lost 60kgs. in a year and a half! Successful in achieving her goal, Evgeniya shared her secrets on her social media.

When her husband saw Evgeniya with her thinner figure and no longer the chubby woman she was before, he felt the attraction come back. Not only did his attitude change, but he tried to win her over again. He seemed to have forgotten when he said to hurt her feelings before, trying to convince her, hoping to save their marriage.

Although she finally ‘felt’ her husband’s sincerity, Evgenia did not give in. She said: “In the face of love, everything is equal. This balance is disrupted when the pendulum tilts to one side.” Finally, Evgenia took a group of artistic photos with her ex-husband, the purpose of which was to give him a divorce commemoration. The greatest gift of all!

She mentioned in the interview: “Since you can’t accept my worst side, it’s not worth having my best side.” Then, the marriage ended.

Women, love yourself and enjoy every moment

After the divorce, Evgeniya shared her story of weight loss on Instagram, which garnered 15,000 followers. The good wife and mother has transformed into an internet fitness celebrity and offers for magazine covers and TV commercials came pouring in. She once shared her feelings on a show: “Women, don’t lose yourself!” In a lasting marriage, self-sacrifice is very common, but in return, her husband cheated and betrayed her. A good relationship should make you feel better, instead of trying to please others, only to forget your own identity. How can you expect others to respect and love you if you don’t value yourself? Women, love yourself and enjoy every moment.

After this painful lesson of betrayal, Evgeniya realized to put herself first and is not afraid to do something different. Only by consistent change can you gradually shape yourself into a better person.

Salesman gets misdialed phone call from elderly woman—immediately drives to her...